Cameron Smith wasn't aware of this incredible moment as he described his new world ranking as "weird". 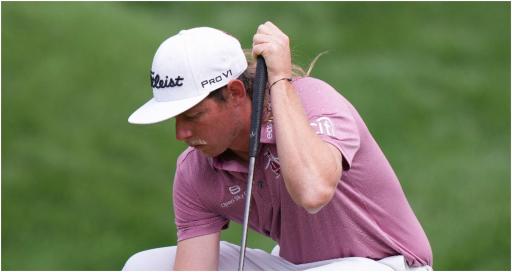 Cameron Smith recreated a moment of history en route to the biggest win of his life at The Players Championship at TPC Sawgrass.

The Australian held a two-shot lead before he pegged it up on the 18th hole at the Stadium Course. Most players would reach for an iron.

Not Smith. He picked up the big stick. He smashed the driver and was going to live and die by his sword. He cares not for others' opinions.

It's what has made him such a stone cold killer when he has the win in his sights. Along with his putting, it's a recipe for success.

Smith had to win The Players the hard way. His tee shot did find the pine straw and he attempted to chip out, but it dribbled in the water.

From there we witnessed one of the most clutch up and downs in recent PGA Tour memory. That ball checked just a few inches from the hole.

Smith never looked like he was going to miss that. He made it. And the rest, as they say, is history. He's $3.6million richer.

Not that the sum of money would make a great deal of difference in his life. Asked before what he would do if he won the FedEx Cup, he said nonchalantly that he would buy some new fishing equipment.

Smith's problems at the 18th reminded golf fans of how fellow Aussie Adam Scott managed to win the 2004 Players.

He too, found the water, and scrambled brilliantly.

Does Smith remember Scott's win? Smith said he did not at his winner's press conference.

The big screens were replaying Scott's triumph as Smith dropped and got primed for his short pitch into the green.

Talk about heart in mouth moment.

"No, I got told after the round, but I had no idea," said Smith, who made birdie at the famous 17th during his final round.

Smith also hit a sensational shot at 17, although he joked that he did in fact hit the ball not where he was aiming.

"I mean, on 17 I hit a really good shot. The wind didn't quite hit it as much as what I thought it was going to," he said.

"Kind of left it alone there for a long time and just kind of helped me out there at the end.

"It [18] is just a hole for me that doesn't really suit my eye. I like to work the ball left to right off the tee. That's where I feel comfortable, and I feel as though I can't hit that shot down there. Just haven't quite figured that hole out.

"[I hit] driver, just because I just wanted to get it down there as far as I could basically. If it did turn over, I was going to have a short shot in, and it just didn't quite turn over.

The win moved Smith up to No.6 in the world rankings. He did not know what he would spend $15million on and still doesn't know what he is going to spend $3.6million on.

He said: "I feel as though I'm playing the best that I've ever played. It's kind of weird to think like that, being kind of the -- probably the last three or four years being the guy that kind of goes from 20th to 40th in the world rankings, and then all of a sudden to be sixth is kind of weird.

"Yeah, it's nice to see all that stuff paying off."

Smith's putting was out of this world when he won.

Just check out these stats from golf guru Justin Ray:

Most strokes gained putting by a @THEPLAYERSChamp is 9.37 by Webb Simpson in 2018.

Cameron Smith currently has a field-best 11.18 for the week.

Cameron Smith has 39 with 4 holes to go.

Cam Smith has only 1 par through 12 holes. He is the first player to do that in the final round at TPC Sawgrass since 1995.

How good did Cam Smith hit his irons and putt?

Cam Smith ranked 68th in the field this week in strokes gained off the tee.

That's the worst ranking in that statistic in a 72-hole, measured ShotLink event by a winner in 15 years.

There have been almost 700 official events in the ShotLink era. Only 2% of tournament winners have gained 11.5+ strokes on the greens.