Carlos Ortiz has made the second hole-in-one of the week at TPC Scottsdale, the first time there has been two aces in the same week in 25 years. 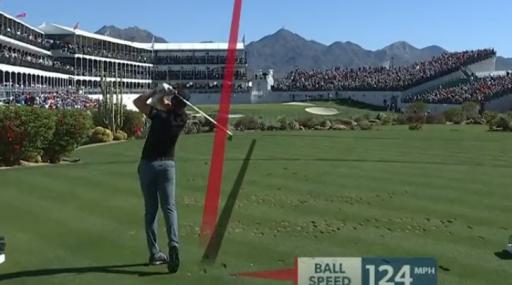 Carlos Ortiz has made the second hole-in-one of the week on the 16th hole at this year's WM Phoenix Open.

After the euphoria of Sam Ryder's ace on the same hole on Saturday, Ortiz hit the perfect shot again which was the 11th ever hole-in-one at the tournament since it moved to TPC Scottsdale in 1987.

RELATED: WHO IS CARLOS ORTIZ?

Much like when Ryder made his hole-in-one, the 20,000 patrons surrounding the whole went absolutely crazy again.

As the popular Mexican celebrated his shot, a series of cans and beer drops rained over him and his playing partners in what was truly incredible scenes.

The 16th hole is simply like no other and it is one of the most iconic holes on the PGA Tour. Patrons often queue from the early hours of the morning to get a seat in the grandstands

Ortiz, who won the Vivint Houston Open in 2020, is unfortunately too far back to trouble Sahith Theegala and the rest of the competitors at the top of the leaderboard.

He then re-wrote the record books in the tournament when making an eagle on the par-4 17th.

Ortiz becomes the first player in WM Phoenix Open history to go eagle-eagle on holes 16 and 17.

On Saturday when Ryder's ball dropped into the hole for an ace, it was the first one since Francesco Molinari holed his tee shot in 2015.

NEXT PAGE: IS LUKE DONALD THE RIGHT MAN TO LEAD EUROPE AT THE NEXT RYDER CUP?