Who is Carlos Ortiz who just made the second hole-in-one on 16 at Phoenix Open?

Carlos Ortiz makes the second ace of the week on the famous 16th at the WM Phoenix Open. 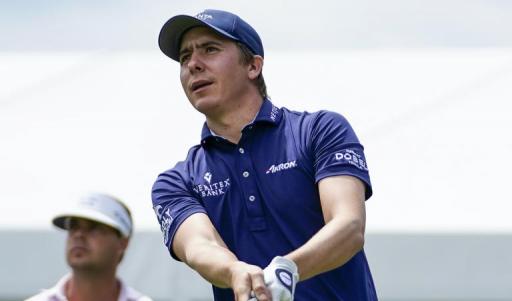 Just 24 hours after Sam Ryder made the first hole-in-one on the 16th in seven years at this week's WM Phoenix Open, Carlos Ortiz has replicated the feat in the final round at TPC Scottsdale.

The hole was playing a little longer than Saturday's front pin position but it mattere little for Ortiz who landed his ball beautifully into the middle of the green as it trundled into the bottom of the cup.

It led to complete mayhem just as we saw with Ryder on Saturday with beer cans being thrown onto the tee box and the green.

Ortiz's ace was the second of the week on the 16th and the 11th on this hole in the history of the tournament.

Incredibly, Ortiz then became the first player in the history of the WM Phoenix Open to go eagle-eagle on holes 16 and 17 when driving the green and holing his 10-footer.

Ortiz, 30, has only won once on the PGA Tour with victory coming when taking down Dustin Johnson and Hideki Matsuyama at the 2020 Houston Open.

That victory saw him become the third Mexican winner on the PGA Tour after Victor Regalado and Cesar Sanudo, and it would qualify him for his debut at The Masters in 2021 but unfortunately he would go on to miss the cut.

The last PGA Tour victory by a Mexican born played before Ortiz's win that week came 22 years earlier by Regalado at the 1978 Quad Cities Open.

Ortiz finished second at the World Wide Technology Championship at Mayakoba at the end of last year but his last two results prior to this week's WM Phoenix Open were a missed cut and tie for 70th at the Farmers Insurance Open.

HOLE-IN-ONE HISTORY ON 16 AT TPC SCOTTSDALE:

NOW WATCH: SAM RYDER MAKES HOLE-IN-ONE ON THE 16TH AT THE PHOENIX OPEN