Tiger Woods, Phil Mickelson & Bryson DeChambeau to all return at The Masters?!

Three of the biggest PGA Tour stars are on the sidelines right now, but will they return at The Masters this April for a shot at glory? 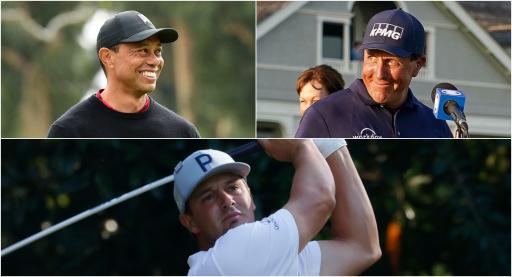 The Masters is arguably the biggest and best golf tournament in the world, but in 2022, there could be significant figures missing that could take the shine off the event.

Bryson DeChambeau, who tried to muscle his way around Augusta National last year, has withdrawn from the Arnold Palmer Invitational this week.

Although The Masters is still over a month away, his withdrawal has cast a cloud over his participation at Augusta. He has now pulled out of this week, the Sony Open and the Saudi International this season.

He admitted in a video on social media that he is not 100% fit to play in the event that he won last year. But what is the extent of his injuries? What is the damage and how long will it go on for?

We can only hope that the former US Open champion is in the field as ever since the Ryder Cup in September 2021, he has reignited his relationship with golf fans and he is now a crowd-pleasing, big-hitting favourite.

Someone else who looks set to miss out is Phil Mickelson. He revealed in an official statement that he would take time away to recover from the fallout of his involvement with the Saudi golf league.

In a dialogue with Alan Shipnuck which he claimed was off the record, he called the Saudis "scary motherf***ers" and referred to their atrocities.

But he later described them as "visionaries" with reference to the emergence of the Saudi golf league, commissioned by Greg Norman.

Mickelson's participation in The Masters will effectively hinge on whether he thinks he can repair his relationship with the sport and the fans, but there is no better place for the 51-year-old to do this than Augusta.

He has three Green Jackets in his wardrobe and at major championships, fans always do well to respect and cheer for past champions.

It is a question of if he has fully tarnished his reputation. As a six-time major champion and a legend of the game, you'd like to think Mickelson would be spared.

A Statement from Phil Mickelson pic.twitter.com/2saaXIxhpu

And as for Tiger Woods, who knows. He told Sir Nick Faldo and Jim Nantz at the Genesis Invitational that he wasn't sure about playing at The Masters.

He told them he will be at the Champions Dinner and he hinted at possibly playing the par-3 contest on Wednesday before the event begins.

The 46-year-old revealed at Riviera that his rehabilitation has been frustrating and his age hasn't helped his recovery time. But he looked mobile and free when walking the grounds in LA.

You would assume that the 15-time major winner won't play. You certainly shouldn't hold your breath as it is just over a year since Woods nearly lost his leg in a serious car accident.

It would be a triumph if all three of these PGA Tour icons played in the event. The patrons will flock like never before and it would bring so many more eyes on our sport than usual.