"I love what's been going on": Bryson DeChambeau on feud with Brooks Koepka

Bryson DeChambeau has said that his spat with Brooks Koepka will play into his hands with the Player Impact Program fund. 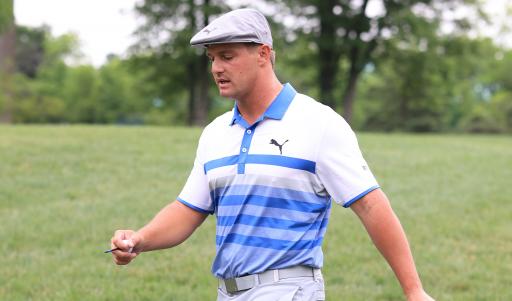 Bryson DeChambeau has had "no issue whatsoever" with his feud with Brooks Koepka and said he's "loved" what's been going on.

The spat between the American pair has lasted a while now, but things came to a head at the PGA Championship when Koepka was visibly agitated at a comment DeChambeau made behind his back during an interview.

Since then, the players have exchanged words on social media and many people have chipped in and been entertained by the tension between the pair, who have five major titles between them.

This feud has come in the inaugural season of the Player Impact Program, where players will be financially rewarded for factors such as social media interaction and DeChambeau said he could benefit from this feud in that regard.

"From my perspective, I mean, if (Brooks Koepka) keeps talking about me, that's great for the PIP Fund," said DeChambeau, as reported by Golfweek.

"I'm happy that there's more conversations about me because of the PIP Fund. I love what's been going on. I've had no issue with it whatsoever.

The Player Impact Program has a purse of $40 million which will be divided amongst 10 players who top each of the non-performance related criteria, including sponsorship exposure and social media interactions.

An exchange between the two players on Twitter began when Koepka tweeted NFL's Aaron Rodgers, who is set to partner DeChambeau against Phil Mickelson and Tom Brady in The Match.

During the argument, Koepka posted a video of a fan calling DeChambeau "Brooksy" at a PGA Championship practice round.

Similar comments have been made to the 2020 US Open champion at the Memorial Tournament this week too, and as reported by Golfweek, DeChambeau said that the PGA Tour should deal with this matter.

"I tried to take the high road numerous times and I think that, from my perspective, I’ll continue to keep doing so and people are going to do what they want to do. So it is what it is."

"Obviously, you're going to have people saying things, but again, like I said yesterday, it doesn't rile me up, it doesn't affect me or anything like that."