Debate: Is it FINALLY time for Rory McIlroy to replace Harry Diamond on the bag?

It's the lazy statistic thrown about but the Northern Irishman hasn't won a major since 2014, so should something change? 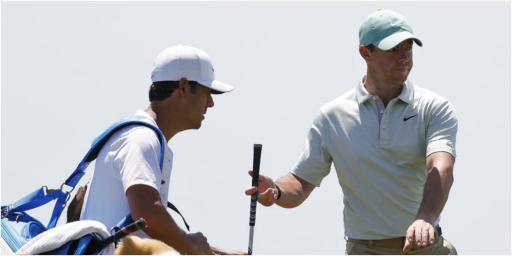 Rory McIlroy finally returned to the winners' circle on the PGA Tour last weekend but this debate appears to rumble on.

It's the same topic that has been doing the rounds ever since 2017 when McIlroy sacked his caddie JP Fitzgerald after a frustrating Open.

The Northern Irishman, now 32 years old, has had his old confidante Harry Diamond on the bag ever since.

They have enjoyed success together such as getting back to the world number one spot and winning multiple PGA Tour titles.

But that fifth major continues to elude McIlroy and no doubt he will be judged on how many he wins when he finally calls it time.

McIlroy admitted last week that "just being me" is enough and he was perhaps trying to be someone else in the pursuit of another win.

Jack Nicklaus picked up on that and echoed those sentiments, urging McIlroy just to keep doing what he is doing.

Fans on both sides of the pond like McIlroy.

RELATED: COULD NELLY KORDA TEE IT UP ALONGSIDE TIGER WOODS?

He is seen as one of the good guys and despite the money, fame and fortune when he doesn't play well it feels personal.

Therefore his career and travails are going to be under further scrutiny and under the microscope just like Tiger Woods.

But McIlroy has already won more major titles than Phil Mickelson has by this age and yet Lefty appears to come in for less criticism.

GolfMagic decided to open up the debate again on our Facebook page with 175,00 and counting readership.

We had a bunch of reasonable comments so we thought we would share the best of them.

He'll be judged on majors so probably if he wants to win some more. Certainly something needs to change when he plays the big tournaments

"Should of had Bones on it when he had the chance. I'd like to see someone on the bag with big time experience."

"Needs to sort his wedge game out not change caddie. His caddie doesn’t hit his wedges for him"

"ThinK he needs to get a different caddie. He is clearly very relaxed with him on it but probably isn’t pushing him enough."

"Yes, seen an interview with Butch Harmon and he’s very highly thought of as a caddie by a lot of players especially Butch. They know more than us mere mortals."

"No. Rory needs a counselor on the course not a caddie. He's got all the talent and golf ability to be one of the best ever but seems to me his head goes for a few holes every tournament ruling him out if winning much more than he has."

RELATED: BRYSON DECHAMBEAU IS ON HOLIDAY... BUT STILL BOMBING IT