Pat Perez had a $100,000 bet with Si Woo Kim that he wouldn't be able to control his temper on the PGA Tour, but has the South Korean passed the test? 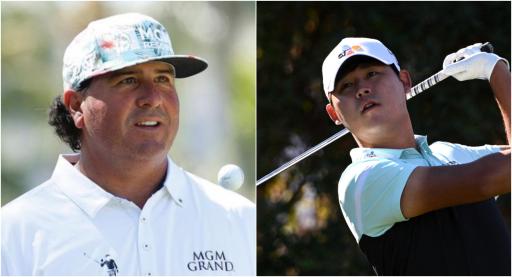 Si Woo Kim is one of the most fiery players on the PGA Tour and he has proved this on a number of occasions throughout his career.

At The Masters in April, Kim snapped the shaft of his putter when he was in a good position to contend for his first major title. He had to use a fairway wood to putt for the last four holes of his second round.

Back in 2017, two weeks after winning The Players Championship, he made a quadruple-bogey at the 9th hole of his second round at the Dean and DeLuca Invitational.

Kim threw his wedge into the lake at Colonial Country Club. This was one of the most famous and angriest outbursts of his career.

But just a week before his headloss at Augusta, he snapped a putter at the Valero Texas Open and borrowed a spare one from Pat Perez.

So Perez proposed a bet to the young South Korean who has won three times on the PGA Tour. If Kim could stop snapping clubs, Perez would give him $100,000.

But if the 26-year-old couldn't keep his cool and stop himself from ruining his equipment, then Perez would be the benefactor of the big wager.

However, a timestamp was never put on the bet, so when will the winner be decided? Kim's caddie Brian Vranesh felt that the end date should've been the turn of the year.

According to the PGA Tour, Kim is never slow to remind Perez of their wager but the American has a tough stance on the situation.

"I'm not paying him anything. Are you kidding me?" Perez said to Golfweek. "It’s all for fun. Funny kid, I like him a lot."

Perez, who has also won three times on the PGA Tour, claims victory in the bet as at the US Open in 2021, Kim threw one of his clubs into a canyon at Torrey Pines.

I think it is unlikely to see the $100,000 change hands at any stage, but it could encourage Kim to bottle up his anger and produce his best golf.

He is the defending champion this week at The American Express, however after 36 holes, he is six shots back in tied 32nd place.

NEXT PAGE: RORY MCILROY, COLLIN MORIKAWA AND TYRRELL HATTON TAKE ON 'THE ONE YARD FAIRWAY'