Patrick Cantlay remained in contention at The American Express on day three but he faces an uphill task for his seventh victory on the PGA Tour. 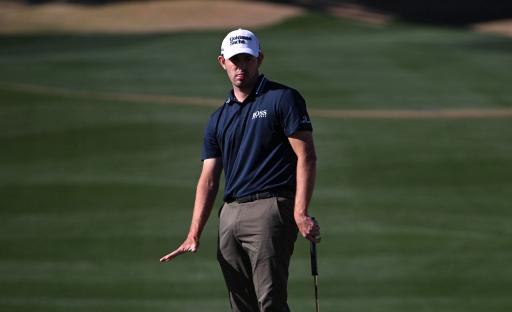 Patrick Cantlay lost ground on day three of The American Express as many players in the chasing pack overtook him in California.

Cantlay, the reigning FedEx Cup champion, fired a disappointing round of 72 on Saturday. He was overtaken by 11 players with rounds in the red to fall four shots off the lead.

The 29-year-old began at the PGA West Stadium Course on 14-under-par with a one-shot lead over Tom Hoge. He started badly with two bogeys in his opening three holes.

The American played his front nine in 1-over-par and made a sole birdie on the back nine to finish with a tame score of level-par. This was a disappointing score for a player who had just broken a streak of 21 consecutive rounds in the 60's.

RELATED: COBRA LTDX 3 WOOD VS COBRA LTDX MAX 3 WOOD - WHICH SHOULD YOU HAVE IN THE BAG?

Cantlay finished second at this tournament last year, one shot behind Si Woo Kim. He is currently sat in tied 11th alongside Sahith Theegala, Denny McCarthy and Will Zalatoris.

Scottie Scheffler and @Patrick_Cantlay with a couple beauties into the par-5 8th. pic.twitter.com/COqCGSr0XD

More importantly, he has four shots to find on Lee Hodges and Frenchman Paul Barjon who both finished on 18-under-par at the end of play in the third round.

Hodges was in scintillating form at the Stadium Course. He played his front nine in 30 shots and added two birdies on the back nine to card a bogey-free round of 8-under-par.

Barjon, making just his 14th ever appearance on the PGA Tour, shot a 65 on day three. Starting on the 10th at the same venue as Hodges and Cantlay, he made eight birdies and one bogey to surge up the leaderboard to 18-under-par.

RELATED: SHANE LOWRY TRAILS BY ONE AFTER 54 HOLES AT ABU DHABI HSBC CHAMPIONSHIP

With one round remaining of The American Express, the pair holds a one-shot lead over Hoge on 17-under-par and they are two shots ahead of Irishman Seamus Power.

Jon Rahm, the World No. 1 and runner-up from the Sentry Tournament of Champions in Hawaii, shot a 5-under-par 67 to reach 13-under-par for the week.

The Spaniard will have work to do and five shots to find if he is to win his seventh event on the PGA Tour. Defending champion Kim is two shots further back on 11-under-par in a tie for 24th place.