Patrick Cantlay leads by one at The American Express as Jon Rahm struggled on day two of the Californian event on the PGA Tour. 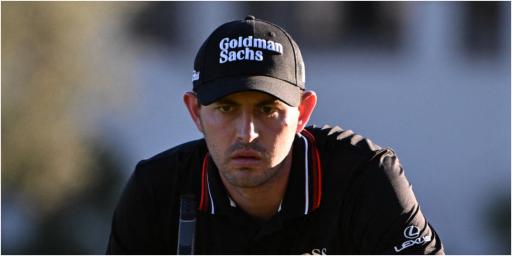 Patrick Cantlay and Jon Rahm were red hot on day one of The American Express but let the field back in after 36 holes.

Cantlay signed for a sublime 10-under 62 yesterday as he looked to try and claim redemption after coming up agonsingly short last year.

But he and Spaniard Rahm cut somewhat frustrating figures as they struggled to really find any momentum on the PGA Tour.

Cantlay missed a glorius eagle opportunity to put daylight between himself and the field, then missed a short par putt at 17.

By day's end, Cantlay signed for a 4-under 68 with a round that included five birdies and two bogeys. Rahm is six shots back.

"I'll have to keep my foot on the gas," said Cantlay, who admitted he thought he went low enough last year on Sunday to win.

It was his 21st consecutive round in the 60s on the PGA Tour.

The unlikely Joseph Bramlett finds himself right in the mix at the top of the leaderboard with Cantlay.

The day really belonged to Will Zalatoris, the buccaneering rookie of the year who went bananas on his back nine.

Zalatoris, 25, played the back nine first and then birdied seven holes in a row from the third to shoot a 61 at the Nicklaus Tournament Course.

Jonas Blixt was the first victim of the par-3 17th hole at the PGA's West Stadium Course on day one.

His tee shot found the rocks on the island green and then he proceeded to hit two consecutive shots backwards to card a seven.

Well, anything Blixt can do Danny Lee can do better, who made a quintuple bogey eight on the same hole.

Lee's tee shot went way left into no man's land. What happened there was pure calamity.

It was made worse as Lee had just made eagle at 16 to move within two of Cantlay, but by the end of the hole was seven back. Yikes.

The difficulties for Justin Rose, Jason Day and Rickie Fowler seem never ending at the moment.

Fowler was touted as someone who could potentially make a ripple this week but is miles off the lead.

So to is Rose, who made an uncharacteristic triple bogey and a double bogey in the space of three holes.

Two of his shots found the hazard from only 70 yards to the pin on a short par-4.

Day has been so out of sorts for so long it's painful to watch now.

He spoke this week how he was feeling fresh after the worst year of his career, but has again struggled.