Padraig Harrington hit what he described as one of his most "memorable shots" on the 8th hole in round two of the Abu Dhabi HSBC Championship. 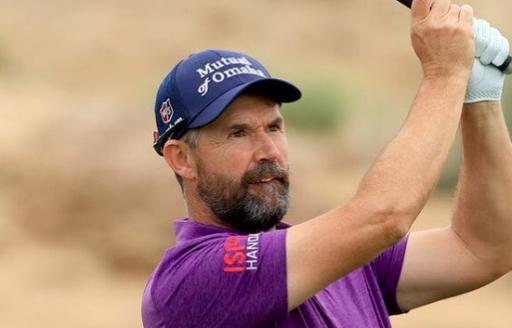 An honest Padraig Harrington took to social media yesterday afternoon and admitted to an embarrassing but memorable mistake at the Abu Dhabi HSBC Championship.

The 2021 Ryder Cup captain was on the 8th hole at Yas Links when he accidentally double-hit a chip. This is a dreaded situation that is usually associated with club golfers.

Harrington, playing with fellow major champions Danny Willett and Henrik Stenson, said that his ball only travelled about four yards and he was lucky that the cameraman took mercy on him.

"Hit one of my all-time most memorable shots today," Harrington wrote on Twitter.

"Double hit a chip on 8. I stuck the club in the ground, ball was only going a foot but I caught it with my follow-through and it went 4 of the intended 12 yards. It was on camera but I guess the producer didn’t know what gold he had."

Some artistic license being used by the producer, definitely not the most artistic swing but sometimes especially on a windy day you've just got to get it done. Shot 71 for a total of level par and 7 shots back going into the weeken. Tied 30th. @DPWorldTour #ADGolfChamps pic.twitter.com/CSeGK41nxE

Unfortunately, we are yet to find any footage of this rare occurrence on the DP World Tour. Perhaps our search should end so Harrington is spared his blushes.

The two-time Open champion ended the day with a 1-under-par 71 despite his mishap. He finished on level-par for the event after 36 holes which was more than enough to make the weekend cut.

His major winning credentials and playing style suited the tough conditions and strong winds in Abu Dhabi down to the ground.

"These are my sort of conditions. With my game now, it’s hard to go out there and try to shoot the really low scores. But today I used my head a lot," Harrington said.

"You have to be really smart in wind like that. Plus, I started with two birdies, which gave me something to hang on to. If you're two or 3-over-par early on a bad day, you can't figure out how to get those shots back. But if you're a couple under-par, you can take a few hits.

"Plus, the fact that I don't know the course very well actually helped. I was playing one hole at a time without ever thinking, ‘I've got to make birdie there, or that hole is tough.’ I stayed in the moment, which is always a good thing."

NEXT PAGE: PATRICK CANTLAY LEADS AT THE AMERICAN EXPRESS AS JON RAHM STRUGGLES