Although he knows it is TaylorMade, the World No. 1 was unaware of which model putter he has actually been using at Kiawah Island this week. 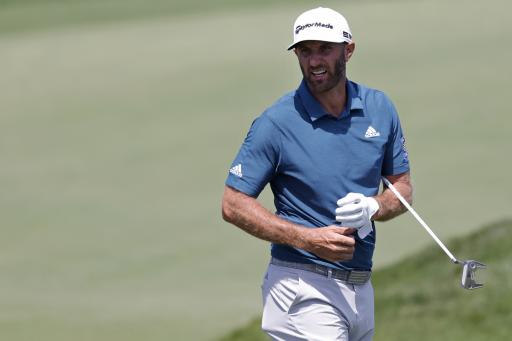 Dustin Johnson had a memorable exchange with a reporter at the PGA Championship in which he revealed he didn't know what putter he was using this week.

Johnson was asked which putter he had this week, on the basis that he allegedly likes to try different clubs in his bag, but to everyone's surprise, the World No. 1 didn't even know what putter he had.

He was aware that his putter was by TaylorMade, as he has been with the company since he turned professional in 2007. In recent months, Johnson has used the TaylorMade Spider IB Tour Limited Black putter, but he has used different models too.

DJ has a fun exchange with a reporter on the putter he's carrying this week. pic.twitter.com/C6LZVVMhhI

The 36-year-old and the reporter shared a laugh after Johnson was unable to answer the question, but he did mention that when a club isn't working for him, he would then try something else.

"How could he not know this," one fan said.

"He's the best!" one fan commented.

"I like how he answers questions like someone who is pretending to be DJ who knows very little about golf," another fan said.

"How can you not love DJ," another fan commented.

"Please leave DJ alone. He is a national treasure," one fan said.

The 24-time winner on the PGA Tour has not exactly excelled in putting statistics at all this season. He is currently 111th in strokes gained in putting and 123rd in overall putting average.

Johnson's recent record in the PGA Championship is extremely impressive and if he can get the putter going, he could land his third major title at Kiawah Island this week.

The big-hitting American has finished second at the tournament in consecutive years now, coming up short to Brooks Koepka in 2019 and Collin Morikawa in 2020.

NEXT PAGE: BRYSON DECHAMBEAU BELIEVES HE SAW UFO'S FROM HIS BACK YARD IN TEXAS

US Open
Brooks Koepka HOBBLES up the steps ahead of the US Open!
US Open
Paige Spiranac on Bryson DeChambeau: "It makes me sick, I might throw up"
PGA Tour
What drivers do the BIGGEST HITTERS on the PGA Tour have in their bags?
PGA Tour
Brooks Koepka to CADDIE for Phil Mickelson? Aaron Rodgers talks on THE MATCH
Golf news
Dustin Johnson joins Bryson DeChambeau as a PARTNER for LA GOLF