Dustin Johnson gives the exact answer we were all expecting about his menu ahead of his upcoming wedding with Paulina Gretzky. 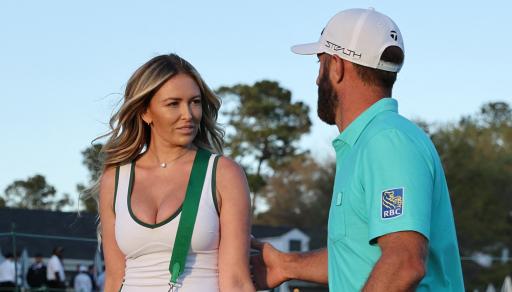 Johnson, speaking ahead of this week's RBC Heritage on the PGA Tour, was asked by one golf journalist whether or not there would be pigs in blankets on his wedding menu.

For reference, DJ announced on his social media prior to hosting the Champions Dinner as Masters champion in 2021 that his menu would include pigs in blankets and lobster and corn fritters as the appetizers.

"Honestly, I don’t know, it’s a possibility," said Johnson with a smirk.

"I haven't looked over the menu yet. I'll let mom pick that stuff."

Related: Paulina Gretzky dresses for the occasion as she cheers on Dustin Johnson at The Masters

Related: Golf betting tips for this week's RBC Heritage on the PGA Tour

Johnson, 37, and Gretzky, 33, are expected to soon tie the knot at Blackberry Farm, a luxury hotel and resort outside of Knoxville, Tennessee.

They have been engaged by nearly a decade and they have two children together.

Paulina is the daughter of Hall of Fame Ice Hockey legend Wayne Gretzky.

Johnson has yet to win on the PGA Tour since landing The Masters in November 2020.

He did win the Saudi International in early 2021.

The big-hitting American finished a respectable tied 12th at Augusta National last week but he was never really in contention for the tournament won by Scottie Scheffler.

As a result of being winless on the PGA Tour for some 18 months, Johnson has slipped from first to ninth in the Official World Golf Rankings as it stands.

Johnson will be looking to get back in the winner's circle at Hilton Head this week, a tournament he has picked up two top-20 finishes in the past two seasons.

Next Page: Greg Norman says DO NOT call it the Saudi Golf League, and he responds to the rumours that he is being paid $50 million a year as chief executive of LIV Golf Investments