Joe LaCava on Tiger Woods future: "I can see him winning again"

Tiger Woods' caddie Joe LaCava didn't expect the 15-time major champion to be able to play at The Masters, despite knowing that his golf was good enough. 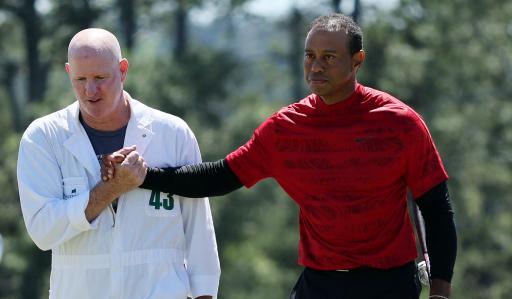 Joe LaCava, the caddie of Tiger Woods, believes that the 15-time major champion can win again if everything falls in the right place.

LaCava, who first caddied for Woods in 2011, didn't expect Woods to play at The Masters off the back of his hosting duties at the Genesis Invitational and his Hall of Fame induction ceremony as it all may have been too much for his leg injuries.

It was always on the agenda for Woods to play at Augusta National, just over a year from his serious car crash. Despite a promising opening round, the 46-year-old finished in 47th place on 13-over-par.

"I don’t think he’s putting in all this work to finish 20th," LaCava said to SI.com/Morning Read.

"I think he’s capable. I think it’s going to have to be the right situation, when he’s healthy and has more stamina. He is working to get to that point. And when he gets there, I can see him winning again.

Related: Phil Mickelson files entry for US Open after skipping The Masters

"That’s the sense I got when we talked or texted. Genesis is a full eight to 10 days that he’s not strictly focused on rehab. It doesn’t sound like a lot but it’s a lot when he’s trying to get healthy and ready.

"Then he was all out for this. And are you strong enough to do it? I don’t think golf was ever going to be the issue. I think he believed that based on December and the little he did at home, his golf would be good enough.

"Then, can you walk a golf course for four straight rounds? Are you strong enough and healthy enough to play? He hadn’t given up on it, but it was a little unexpected to me that he was able to pull it off.

"From the Hall of Fame to a month later and he’s playing. I was a little surprised."

His golf was certainly not the issue as he outscored many of the world's best players such as Jordan Spieth, Bryson DeChambeau and Brooks Koepka who missed the cut.

As we saw at the PNC Championship in December, he and his son Charlie played very well together and they came second to John Daly and his son.

LaCava knows Woods better than most people and his words will excite many golf fans. Woods confirmed after The Masters that he still isn't capable of a regular PGA Tour schedule, but he will play in The Open Championship at St. Andrews.

Next Page: Sir Nick Faldo explains Rory McIlroy shot reveal: "It was my first c*** up"