After their Pro-Am on Friday in Orlando, Tiger Woods sat back and watched his son Charlie play even more golf. 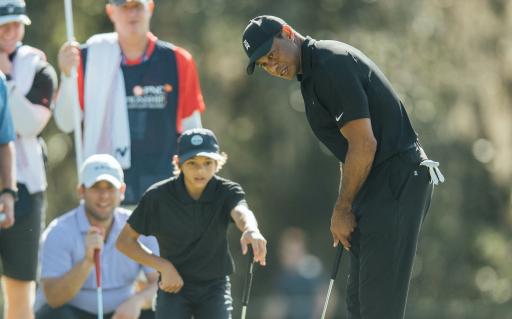 It was fantastic to see Tiger Woods back out on the course during the Friday Pro-Am at the PNC Championship with his son Charlie.

His swing, maybe slightly slower and more soft now, produced some fine shots at the Ritz-Carlton Golf Club and he even admitted he felt some nervous flutters on the first tee box.

Charlie, 12, also hit some superb approach shots and rolled in some great putts. It was almost surreal to see Woods back in action as we never knew if we would see it again.

But what Friday at the PNC Championship did expose was the journey to recovery that the 15-time major champion is still on. He still walks cautiously and gingerly and is unable to walk for 18 holes.

He can't explode from his right leg anymore when hitting a driver, the leg that he has almost lost as a result of the injuries he sustained from his car accident in February.

Time to kick back and watch Charlie after a long day for Tiger. pic.twitter.com/zgd4dWRkxq

We knew this before this week, Woods told us all that 'hit and giggle' events will be the only ones in the diary. But after seeing him trudge around for 18 holes, it proved that he wasn't being modest, he was completely honest and real with the current state of his body.

"I couldn't walk this golf course even right now, and it's flat. I don't have the endurance. My leg is not quite right yet and it's going to take time. I told you in the Bahamas, I'm a long way, way from playing tournament golf," said Woods.

"This is hit, hop in a cart and move about my business just like I would at Medalist. Being able to play tournament golf and being able to recover, practice and train and hit balls after a round and do all of the things that I need to be at a high level, I'm a long way away from that."

His physical capability was no more evident than when after the round, he went to watch Charlie hit even more balls on the driving range. We all wish we still had this much enthusiasm.

As he walked over, he put his bag down and put himself down. He laid on the floor, exhausted from the day, and watched his son hit balls.

Despite his fatigue, I doubt the 45-year-old will ever get bored of watching his son hit golf balls, especially with the quality that Charlie has already achieved.

The Woods team will tee off later this afternoon alongside Justin Thomas and his father Mike at the PNC Championship. The Thomas duo are the defending champions.