It would appear that Justin Thomas is still clinging to his youth with this lunchtime snack. 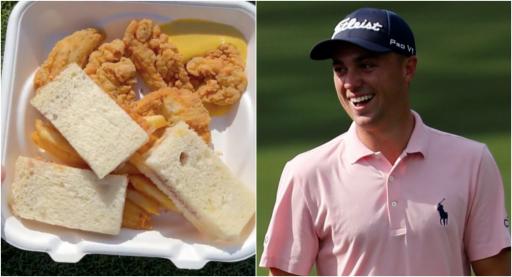 Justin Thomas is one of the more youthful players on the PGA Tour. He is always cracking a smile and sharing a laugh with other players such as Jordan Spieth and Rickie Fowler.

Last week, he and fellow PGA Tour player Smylie Kaufman shared a joke on Twitter when they requested footage of themselves making a bogey at the 2017 QBE Shootout.

Essentially, Thomas is not one to take himself too seriously and this has never been more clear than in his latest post on his Instagram page.

The 2017 PGA champion posted a video of his lunch yesterday at the PNC Championship and it looked as though his father and partner for the week Mike may have packed it for him.

"You guys thought I was kidding, see what I've got for lunch today. Chicken fingers, fries and PB & J. Never grow up." This was the contents of the World No. 6's lunch.

"A lot of beige in that box, come on JT you’re an athlete," fellow major champion Rory McIlroy commented on the video.

This is another reason why Thomas, who has won 14 times on the PGA Tour, is such a likeable figure in golf. It is clear to see that he is down to earth and follows no strict diet when it comes to his career.

Thomas will want to be appropriately nourished if he and his father are to defend the title that they won by one shot at the PNC Championship last year.

They are set to tee it up in the first round of the 36-hole event at Ritz-Carlton Golf Club with Tiger and Charlie Woods, just as they did 12 months ago.