After all these years, footage has finally emerged of this incredible shot by Jordan Spieth as he defeated Justin Thomas. 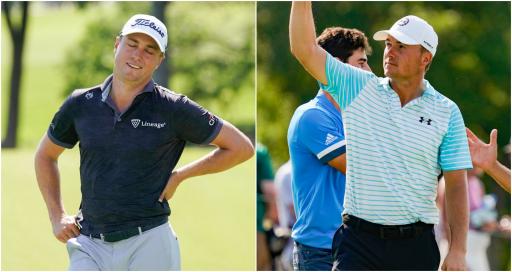 Jordan Spieth and Justin Thomas have grown up playing golf together.

They have been around the game so long it's hard to believe that they are both still in their 20s (just).

Over the years, they have been involved in some memorable moments at major championships, Ryder Cups and Presidents Cups.

But there is one moment that stands out between the pair and it goes all the way back to the 2012 NCAA Championship.

It pitted Spieth and Thomas together in the final match between the Alabama Crimson Tide and the Texas Longhorns.

Texas won the match with Spieth defeating Thomas 3&2, but it included an incredible hole out from the 15th fairway at Riviera.

It's a moment that Spieth's caddie Michael Greller will - to this day - still chide Thomas about.

I mean, why wouldn't you.

So much so, that there is an annual tradition whereby Greller will FaceTime Thomas from the 15th fairway at Riv.

"Michael FaceTimes [Thomas] every single time on the 15th hole and he stops answering now," Spieth told the media earlier this season at the Genesis Invitational.

"He asked when we were walking up 15 if he should FaceTime him now even though he was two groups behind us.

"Justin answered it for a few years and now he just either answers it flipping him off or he doesn't answer it at all."

But now, video has finally emerged of the shot.

For years we've heard about it. Now Spieth's caddie can send him the footage too when Thomas refuses to answer his FaceTime next time he's at Riv.

Look at this in all its glory, what a shot!