Justin Thomas made an incredible par save during the first round of the Charles Schwab Challenge despite having to contend with a fence. 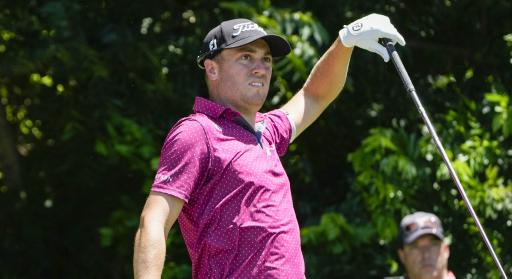 Justin Thomas must've thanked his lucky stars when he found his tee shot on the 3rd hole at Colonial Country Club on the right side of a tall fence.

Thomas pulled his drive on this hole during the second round of the Charles Schwab Challenge and he feared the worst with a metal fence standing on that side of the hole.

The two-time US PGA champion's backside was inches from the fence and he essentially had to swing down the path of the structure.

While contending with the fence, Thomas also had to keep his shot underneath the branches of the trees that surrounded his ball.

The World No.5 had a 50-yard pitch left on this 471-yard par-4. He stuck his approach to around six feet and he rolled in the short putt for a miraculous par save.

Fresh from winning his second major title at the US PGA Championship last week, Thomas shot a 1-over-par 71 to finish five shots behind eight players who co-lead on 4-under-par.

Thomas made three birdies, two bogeys and a double-bogey on the par-3 13th hole. On the par-3 8th hole, Thomas pulled his tee shot over some trees and was forced to hit a pitch next to two expensive cars.

World No.1 Scottie Scheffler and Patrick Reed are in the leading group on 4-under-par after the first round in Fort Worth.