For over a year, Maverick McNealy has worked with Callaway to make irons just for him on the PGA Tour and it has culminated in a unique set of clubs. 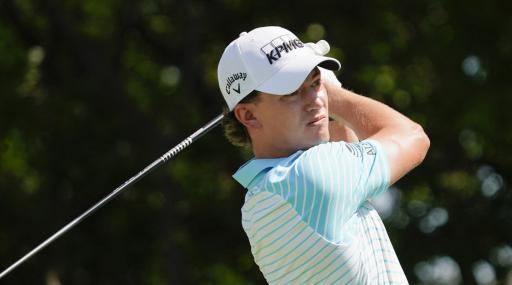 Maverick McNealy has been a Callaway staffer since he turned professional in 2017, but he has often chopped and changed his irons on the PGA Tour.

As reported by GolfWRX, McNealy and Tim Reed, the Senior VP of Global Sports Marketing at Callaway, began working on an iron set fit for his needs just over a year ago.

"It’s really trying to fill a gap in the performance blade market, which there really isn’t anything with that much length heel to toe and a centre of gravity far enough from the hosel," McNealy said.

"For me... getting that centre of gravity further away from the hosel gives me more clubhead awareness on the way down. It slows down the closure rate and keeps the clubface square longer.

"I found out with other blades, because they’re so short heel to toe, and the centre of gravity is so close to the heel, that I was shutting them down too fast for me. So these help keep the clubface square on the way back and give me that awareness on the way through."

At the Charles Schwab Challenge this week, McNealy has 4-9 Callaway Apex MB prototype irons and also a 10-iron and an 11-iron which replace his Nike pitching wedge and his Callaway gap wedge. At the AT&T Byron Nelson, he used a mixture of Nike and Callaway irons.

The inclusion of these rare clubs is so the World No.77's iron set can "flow smoothly into his wedges." McNealy doesn't chip with his wedges and he wanted these two clubs to resemble a normal iron.

"The 10 and 11 iron is a fun project for us because I almost never chip with a pitching wedge or gap wedge, and if I do it’s a bump and run, so I just want something that’s going to flow straight through from my short irons to my approach irons, or however you want to call them," he added.

"I’ve seen them launch lower with a little bit more spin, which is great for distance control, and they feel just like my irons, which is a pretty exciting project."

The 26-year-old just needs a 3-iron to complete the set. On Thursday, he shot 1-over-par to sit five shots behind the eight co-leaders on 4-under-par.