Jordan Spieth convinced Michael Greller that he could hit an incredible recovery shot during the first round of the Charles Schwab Challenge. 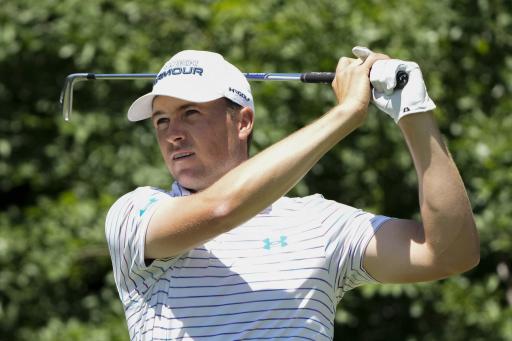 Jordan Spieth and Michael Greller had one of their famous chats when Spieth found himself in the trees on the 18th hole at the Charles Schwab Challenge on Thursday.

The 28-year-old slipped when hitting his tee shot and he pulled it left and underneath some trees, 275 yards down the hole. He had 153 yards to the pin.

This was Spieth's last hole of the first round and as they wanted to end on a positive note, Spieth and Greller discussed his options.

"I just don’t see it, Jordan," Greller opened with.

"What don’t you see? I was going to hit a straight punch at the cameraman with a punch cut and just get it to cover over the water and hit it hard," Spieth replied.

"I just don't see it Jordan." @JordanSpieth sees the game differently than all of us. pic.twitter.com/PCqL7Yikk9

"I’m just saying how it’s coming out of here, if it pops up, you know," Greller worryingly added.

"No, just hit it here and then hit a wedge," said Greller, wanting his player to play safe and find the fairway.

The three-time major champion declared it was "on him." He hit his low cut under the trees and played a perfect shot. His ball ran up to the back of the green.

He finished with a par and a 1-under-par 69 at Colonial Country Club. He is three shots behind Scottie Scheffler and seven co-leaders.