Justin Thomas was faced with a rare situation on the par-3 8th hole at Colonial Country Club, which most amateur golfers would dread. 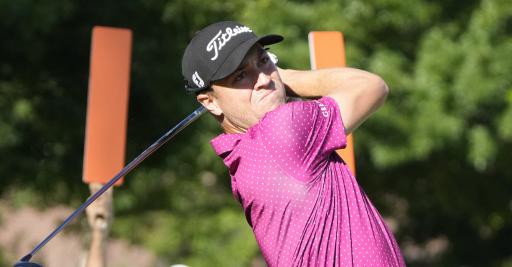 The hearts of most amateur golfers would skip a beat if they were faced with the shot that Justin Thomas had during the first round of the Charles Schwab Challenge.

Thomas stood on the par-3 8th hole on level-par and tied 32nd place, but he pulled his tee shot so far that it cleared the trees next to the green.

The newly crowned two-time US PGA champion was not only faced with an impossible pitch back over the trees, but he had two expensive flash cars in his way.

For a two-time major champion and former World No.1, the cars wouldn't have even crossed his mind but for us mere mortals, it would be at the forefront of our thoughts.

Thomas looped his shot over the trees but it fell short of the putting surface. He made a bogey and carded a 1-over-par 71 to sit five shots off the lead.

Related: "LLLL" Why the PGA Tour pros are making equipment with these letters

The 29-year-old beat Will Zalatoris in a playoff last week at Southern Hills and he is straight back in the action at Colonial Country Club this week in search of his 16th PGA Tour win.

Many golf fans saw Thomas' shot over the cars and left some hilarious comments below:

I would destroy both of those vehicles with one swing

What the spectators are seeing if I’m in that position pic.twitter.com/oPo6llf0iQ

Well. He's in a car park and he's a champion

You’ve clearly never practiced with your wedge front yard to back yard, over the house