Perhaps Bryson DeChambeau has convinced Lefty to make the permanent switch with the flatstick. 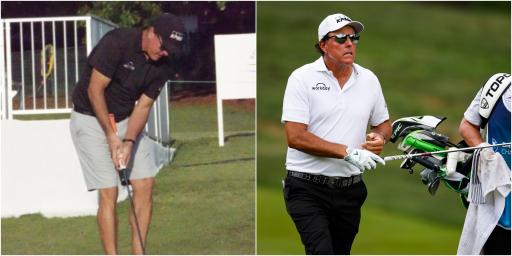 Phil Mickelson has never been afraid to tinker, with his weight, with his clubs, or the length of his driver.

Now Lefty appears to have been influenced by Bryson DeChambeau as he was using an armlock putter at the Fortinet Championship.

It remains to be seen whether Mickelson has been convinced to make the permanent switch as he struggled on the greens.

He carded a first round 70 to see him into the clubhouse at the Silverado Resort North Course in California, Napa.

It's still a prototype that looks similar to the Odyssey PM Blade he has used for several seasons.

Phil Mickelson ‘not sold’ on armlock putting grip after shaky round onehttps://t.co/SaewUQBr3z pic.twitter.com/8Zs7Kc04Q2

“I saw that playing out differently in my mind.”

Reportedly, it's built to rotate less throughout the stroke.

Mickelson told the media he's been messing with the grip for about six weeks.

"But it seems like I've had moments where I just start rolling it in from everywhere," he said.

He told the PGA Tour's official website: "The longer grip allows him to grip down a little more than the original wrist-lock grip."

NEXT PAGE: TOMMY FLEETWOOD EXPECTS NOTHING BUT EUROPE WIN