Kristoffer Broberg and Richard Mansell shot a 64 on day two of the Dutch Open to wipe out the previous course record set by Niall Kearney in the first round. 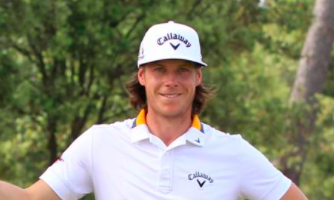 Kristoffer Broberg broke the course record at Bernardus Golf in Cromvoirt for the second time in two days at the Dutch Open to lead after 36 holes.

Irishman Niall Kearney had originally broken the record with a first-round score of 65, but the Swede shot 8-under-par on Friday to open up a one-shot lead over Thomas Detry and Marcus Helligkilde.

Broberg, who won the BMW Masters in 2015, began on the 10th hole in the second round and started well with four birdies in his first five holes.

Although he made a bogey at the par-4 16th hole, he added birdies at the 18th, 2nd and 3rd holes on his way to a fantastic round of 64 to break the course record.

RELATED: TOMMY FLEETWOOD EXPECTS NOTHING BUT A EUROPE WIN AT THE RYDER CUP

The 35-year-old's best finish on the European Tour this season is a tied 14th finish at the Scandinavian Mixed, so he has made a welcome return to form at the Dutch Open.

Richard Mansell also levelled the course record too. The Englishman made six birdies and an eagle at the 18th hole to complete his score of 8-under-par to sit on 9-under-par and three shots behind Broberg.

Kearney couldn't quite match his heroics of the first round on Friday, but a solid score of 3-under-par kept him in the hunt on 10-under-par, only two shots behind Broberg on 12-under-par.

After a 1-under-par round on Thursday, Ryder Cup vice-captain Graeme McDowell burst into life with a 6-under-par 66 in the second round to rise up the leaderboard.

The 2010 US Open champion made seven birdies and just one bogey in Cromvoirt to reach 7-under-par for the week and in with a chance at the weekend.

Englishman Sam Horsfield is one shot further back of McDowell on 6-under-par, while Thomas Pieters and Branden Grace both sit on 4-under-par for the tournament after 36 holes.

NEXT PAGE: THE PHANTOM OF THE OPEN: CHECK OUT THIS HILARIOUS TRAILER FOR NEW GOLF FILM