"The golf carts are the caddies": Bryson DeChambeau QUIET on caddie situation

It looks as though Bryson DeChambeau will be without a caddie for The Match against Tom Brady and Phil Mickelson. 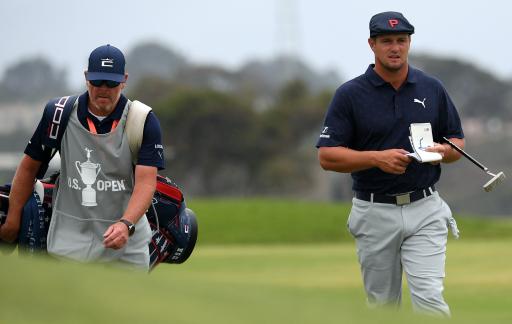 Bryson DeChambeau remained cagey when he was asked about his caddie situation in the lead up to The Match later today.

DeChambeau and his caddie Tim Tucker parted ways just before the first round of the Rocket Mortgage Classic, where the big hitter failed to make the cut for only the second time this season.

Ahead of the made-for-TV fixture at The Reserve at Moonlight Basin in Big Sky, Montana, the 2020 US Open champion gave very little detail about his caddie plans for the near future.

"The golf carts are the caddies," said DeChambeau.

"For me, it's just going to be hitting as many bombs as possible. On this golf course at this elevation, I'm going to try to hit as many greens as possible that are 400-plus (yards)."

The Match is back! Tune in tomorrow at 5:00pm EST on TNT. @AaronRodgers12 and I are going to make more than just some noise... pic.twitter.com/TpS7zcrYGI

It looks as though DeChambeau is set to use the same tactics as he does on the PGA Tour by hitting each drive as hard as he can.

The World No. 6 is making his first appearance in the popular fixture, teeing it up with Green Bay Packers quarterback Aaron Rodgers against six-time major champion Phil Mickelson and Tampa Bay Buccaneers quarterback Tom Brady.

As ever, DeChambeau has been the centre of attention on the PGA Tour, but his agent Brett Falkoff informed the public as to why he and Tucker parted ways, and why Ben Schomin took up the reins in Detroit last week.

"They had a good run, and they mutually agreed yesterday afternoon to go their separate ways,"  Falkoff said last week.

"Everything runs its course. Tim was getting tired and Bryson was getting tired. In any relationship, they run their course, and that's what happened here. It wasn't one specific issue. It was a culmination.

"Like any caddie-player relationship, they had their ups and downs. They wish each other nothing but the best and will always be there for each other."

DeChambeau and Tucker worked together to win eight PGA Tour titles, including the 27-year-old's maiden major title at the US Open back n September.

It is an interesting time for DeChambeau who will need to sort out his caddie situation if he wants to prepare properly for next week's Open Championship.