The World No. 4 enjoyed a solid week at the Memorial Tournament and he delighted fans with a monster drive on the 5th hole. 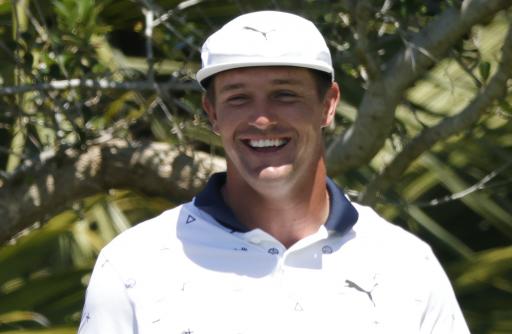 Bryson DeChambeau is still the biggest hitter on the PGA Tour and he showed this on the 5th hole at the Memorial Tournament.

The World No. 4 posted a video on his Instagram page of the monstrous drive that he hit on the par-5 5th hole at Muirfield Village, saying how much he enjoyed playing Jack Nicklaus' course last week.

On this hole, there is an abundance of trees to the right of the fairway but, as the 27-year-old possesses so much power, he aimed over the trees and fired his ball over them.

He carried the drive 327 yards and the overall distance of the shot was 350 yards. Replying to a fan in the comments of his video, DeChambeau said that he only had 140 yards left to the green.

"Growl at them Bryson," one fan said.

"Majority of haters in these comments only carry their driver 200 yards," one fan commented.

"That was an incredible drive," another fan said.

"Keep going Bryson! Love rooting for you every week!" another fan commented.

"oo Bryson your my favorite player on tour love watching you," one fan said.

The man from California went on to finish tied 18th at the Memorial Tournament, which is only his second top-20 finish on the PGA Tour in his last six events.

However, what he does lead the way in is driving distance and statistics from the tee box. He averages 322.7 yards with each drive which is longer than anyone on tour.

The 2020 US Open champion won the Memorial Tournament in 2018, which was the second of his eight victories on the PGA Tour to date.

NEXT PAGE: RICKIE FOWLER FAILS TO QUALIFY FOR US OPEN FOR FIRST TIME SINCE 2010