Bryson DeChambeau and Aaron Rodgers beat Phil Mickelson and Tom Brady 3&2 in the fourth edition of the match, but Lefty still found time to sledge his fellow PGA Tour opponent. 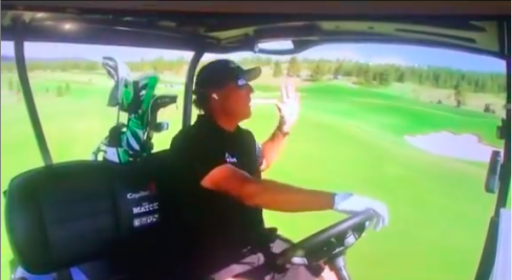 Phil Mickelson may have lost in the fourth edition of The Match, which was he and his partner Tom Brady's second loss as a pair, but he provided some great commentary throughout the day.

The Match was played in great spirits and it provided great entertainment for the thousands of viewers who tuned in as Bryson DeChambeau and Aaron Rodgers took a 3&2 victory.

On one hole, Mickelson was riding in his buggy in the middle of the fairway and asked DeChambeau if he had taken a penalty drop, because he thought the big-hitter's ball had gone in the trees.

Lefty, who was left bewildered to his opponent's ball in the fairway, spoke to the broadcast commentary team via his earphones and he expressed his surprise that DeChambeau's ball somehow ended up in the middle of the fairway.

The six-time major champion was only making tongue-in-cheek comments for all of our amusement and this was typical of the afternoon.

At one stage in The Match, the Green Bay Packers quarterback Aaron Rodgers holed a great putt and walked it in Kevin-Na style, and then rejected a fistbump from Mickelson.

As well as great camaraderie, there was some great golf played at The Reserve at Moonlight Basin in Montana, and many golf fans left their comments on Mickelson's joke.

"Think we’ve all been there with our playing partner. Phil is just chatty, he digs this stuff," one fan said.

"That’s why Phil ruined the broadcast," another fan said.

"Wanna improve your lie a lil sir?" one fan said.

NEXT PAGE: RORY MCILROY RESPONDS AFTER GOLF FAN TAKES CLUB FROM HIS BAG AT SCOTTISH OPEN