Three-time major champion Vijay Singh accidentally hit his ball out of deep rough towards some spectators at the US Senior Open. 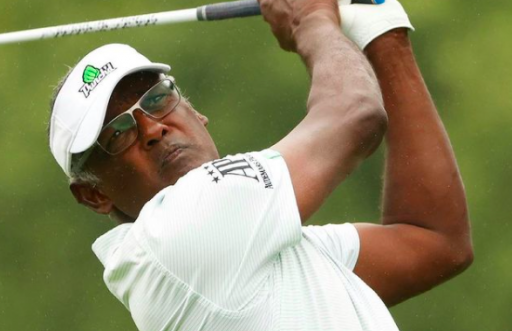 The US Senior Open has arrived at Omaha Country Club this week where many of the sport's legendary figures are looking to secure victory.

One of them is three-time major winner Vijay Singh however, the big Fijian made a bad start to his week in Nebraska with an opening round of 5-over-par.

Singh evidently struggled on day one of the championship and he had a moment to remember, for all the wrong reasons, on the short par-4 13th hole.

The 58-year-old found himself in extremely thick rough after his tee shot and he could only chop his ball out of the thick vegetation at Omaha Country Club.

Related Articles
Cameron Smith in the mix at FedEx St. Jude Championship amid LIV Golf links
Here's why the PGA Tour have not suspended Cameron Smith from the Playoffs

However, as he hacked his ball out, it flew a short distance down the hill and hit a spectator who was sat on a chair in a small crowd of people.

The spectator fell backwards from their seat and laid on the floor. As the footage continues, it becomes a very strange situation as no one appears to want to help the person who has been hit.

This could mean that the spectator wasn't hurt when the ball struck him, but it certainly makes for uncomfortable viewing.

Golf fans reacted to the accident:

The man that was hit, was an ex-soccer midfielder who awaits the yellow flag

The man that was hit, was an ex-soccer midfielder who awaits the yellow flag

It’s like the people who stand near the edge of those crazy car races.

Hopefully he got the coveted Vijay Singh autographed golf ball

NEXT PAGE: GOLF FANS REACT AS JUSTIN THOMAS WEARS A HOODIE AT THE SCOTTISH OPEN!