Ian Poulter has clearly enjoyed the spat between Brooks Koepka and Bryson DeChambeau as much as the rest of us. 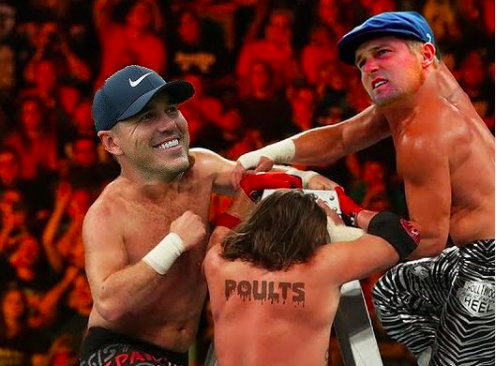 Ian Poulter is one of the most outgoing and controversial personalities on the PGA Tour, but not even he can keep up with Brooks Koepka and Bryson DeChambeau this week.

It is no secret that the American pair share a common dislike for each other and this was made most obvious when Koepka was visibly annoyed by DeChambeau in an interview at the PGA Championship last week.

Poulter, who has clearly enjoyed the feud as much as the rest of us, posted a picture on Instagram which depicts the current situation with the Player Impact Program.

The picture is of two WWE wrestlers fighting to get to the top of a ladder, but Koepka and DeChambeau's faces have been superimposed onto the bodies.

There is another wrestler in the picture, who is struggling to compete with the other two, with a tattoo of "Poults" on his back. Poulter also added in the "Money in the Bank" WWE logo and the PGA Tour emblem to foreshadow the cash on offer with the Player Impact Program.

The program was devised to reward players on a number of different non-performance related criteria, such as social media interaction and sponsorship exposure.

It is fair to say that when it comes to social media interaction, Koepka and DeChambeau have certainly boosted their chances of winning a share of the $40 million purse on offer.

"Desperate for attention as usual..." one fan commented.

"40 million for jokes and memes. Crazy," another fan said.

"This stuff is soooo good!" another fan commented.

"Double it! This stuff is priceless," one fan said.