The PGA Tour pros are marking golf equipment with the letters LLLL this week at the Charles Schwab Challenge. 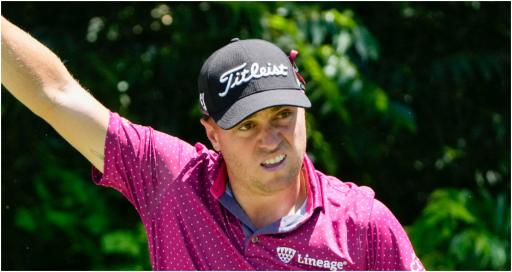 Eagle-eyed viewers watching the PGA Tour this week will have noticed the players wearing ribbons on their caps.

That is, of course, to pay tribute to the victims of the mass shooting at a Texas elementary school on Tuesday.

In total, 21 people died including 19 children when the gunman opened fire at Robb Elementary School in Uvalde.

The PGA Tour players have also been marking up their golf balls, yardage books, gloves and caps with the letters LLLL.

That is because the student mission statement of the school is: "Live. Learn. Love. Lead."

By day's end, as many as eight players tied the 18-hole lead at the Charles Scwab Challenge at Colonial Country Club.

Some PGA Tour players offered their thoughts after they played their first round.

Tour officials are handing out ribbons and encouraging players to honor the victims of the Uvalde, Texas, school shootings. pic.twitter.com/3tcjynNVGo

Scottie Scheffler said: "Yeah, anytime you see stuff like that, I can't imagine what those families are going through right now.

"It makes me sick to my stomach just to think about it. I can't imagine what the parents are going through.

"I read some stories on it last night, just the DNA testing to find out if your eight year old is going to survive or not.

"Our prayers go out to those families and the deceased. There's so much that happens past right now.

"There's so much scar tissue for those kids that survived. I just can't imagine what they're going through. All we can do is just pray for them."

Patrick Reed added: "Yeah, it's very tragic what happened down there, and all of our thoughts and prayers are out to all the victims and their families.

"It's one of those things that it definitely puts a perspective on what we do. We play a sport for a living.

"Whether we're traveling the world, playing in events, or whether you're at home with your family, you just have to enjoy life and cherish life, because at the end of the day you just never know when life can be taken from you.

"It's so sad, and to be honest with you, the ribbons don't even speak to how we all feel and how much support we have for them, because at the end of the day we have to stick together because the world is a dark place right now, and really there's no reason for anyone to go after each other."

More: Thomas Pieters argues with fan over US gun violence