England's Eddie Pepperell shares the lead at the Dutch Open on the DP World Tour after playing the course blind. 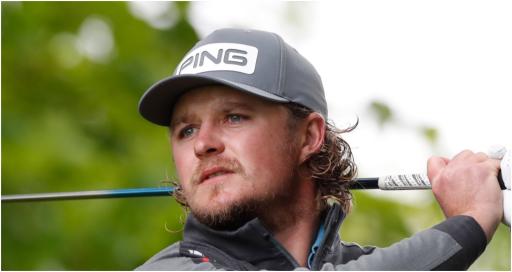 Eddie Pepperell admitted not playing a practice round before the Dutch Open may have paid dividends as he found himself sharing the lead after 18 holes.

It has been a frustrating couple of years for England's Pepperell. Before the pandemic, he was touted as a future Ryder Cupper after his best ever season on the DP World Tour.

But for some reason we are sure the golf gods will never reveal to Pepperell, things have been getting worse and worse. He'll tell you as much. Just check his Twitter for insight into that.

But now the Englishman has returned from the wilderness and shares the lead on the DP World Tour thanks to a 6-under 66 at Bernadus Golf in Cromvoirt.

There was only one blemish on his card thanks to a bogey up the 18th. It followed seven birdies sprinkled in a very good round of golf.

And perhaps one of the reasons for that is returning to what has worked for him before. He decided not to play a practice round and may just have to thank his girlfriend Jen for that pearl of wisdom.

"Last year I was trying hard, I was turning up to tournaments early, y'know, working. I say working in inverted commas; working a lot harder than I historically did," he told Sky Sports.

"I was getting home knackered and Jen was like, 'What? What are you doing? You are used to playing majors blind when you were doing well [and] you didn't bother with practice rounds.'

"I think she's got a point and y'know, for me, I always focused on energy levels [and my] short game [and] trying to at least feel comfortable with where my game is actually at.

"I could play my home golf course and swinging it with way I have been over the last couple of years not make a cut out here, so, the truth is you have gotta have your skill set.

"I'm just prioritising that and I think things are moving in the right direction."

Pepperell is joined atop of the leader board at with young Danish superstar Rasmus Hojgaard. German Marcel Schneider (67) is one stroke behind.

A host of players are grouped at 4-under par after the first round that includes English duo of Jordan Smith and Richard Mansell. Scotland's Ewen Ferguson is also inside the top-10.