Tiger Woods has thrilled golf fans on hundreds of putting greens over the years and this is no surprise when you see him practising with this type of drill. 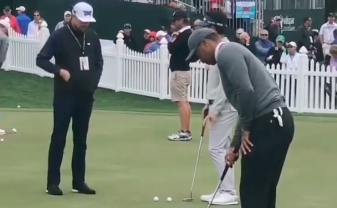 Tiger Woods was a revolutionary golfer with the way he shaped the ball and the distance he hit his drives with his flexible and powerful swing.

But what also shouldn't be forgotten is his mesmerising short game which he used so crucially on many occasions to win his 15 major titles and 82 events on the PGA Tour.

From his incredible 60-foot putt on the 17th hole at TPC Sawgrass in 2001 to his fantastic putt to force a playoff with Rocco Mediate at the US Open in 2008, Woods has produced complete magic with his putter.

From the video above, it is evident that the 45-year-old focused on precision and a steady stroke with his putting practice. As you can see, it requires a lot of concentration and strength to be able to pass the putter head in between the tees with one hand.

If anything, the video of this drill shows the immense talent and calmness that Woods could show on the green and it comes as no shock that he experienced such success.

According to I'm Just Golfing, Woods faced 1,543 putts from 3 feet between 2002 to 2005 and he only missed three of them, which is a staggering statistic.

"I need time for this. Key word TIME," one fan said.

"Did the guy at the end try and take his balls?" another fan said.