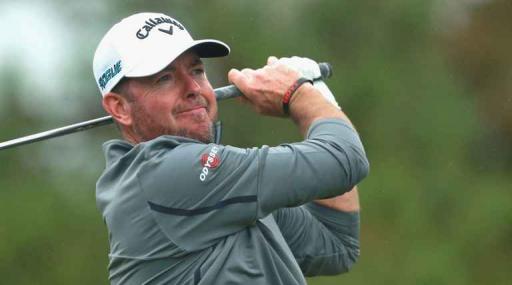 Many people would probably watch Robert Garrigus putt and quench in exasperation as he bends over to take his stance.

This is because, for many years, Garrigus has used a putter that is only 28 inches in length which is significantly smaller than the common length of 34 of 36 inches.

For many of us, if we used a putter as short as this for a sustained period of time, we would probably suffer from severe back pain. But for Garrigus, it has brought him success on the PGA Tour.

As you can see in the picture above provided on Instagram by GolfWRX, the grip of the putter is almost level with his knees and his body has almost created a 90-degree angle.

Golf fans reacted to the picture of Garrigus:

"Hurts my back just looking at this," one fan said.

"When everything else has failed…" another fan commented.

"Doctor said I need a backeotomy," one fan said.

It is said that people who use small putters like this may have difficulty getting their eyes over or just inside the intended line of the putt, resulting in pushes and pulls.

The 43-year-old won his first and only PGA Tour title at the Children's Miracle Network Classic in 2010, finishing ahead of Roland Thatcher and Rickie Fowler.

In the 2012 PGA Tour season, Garrigus finished second on four different occasions and came very close to adding to his career tally.

Since then, however, he has struggled to find consistent form and appearances on tour. In 2021, he has only played in five events in which he has either withdrawn or missed the cut.

NEXT PAGE: RORY MCILROY HITS BACK AT CRITICS OF HIS CADDIE HARRY DIAMOND