Jon Rahm made a fantastic start to his second round at the Scottish Open, but things stopped going his way at the turn. 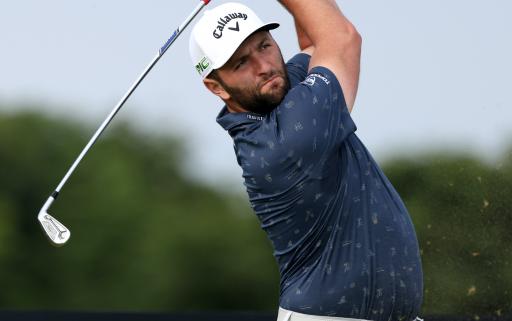 Jon Rahm is in the hottest form of his career at the moment and he made a superb start to his second round at the Scottish Open on Friday.

Having shot 5-under-par in the first round, he began his second round with six birdies in his first nine holes. The putter was working well and nothing could go wrong for the World No. 1.

But the beginning of the back nine was a different story. The Spaniard made bogeys on the 2nd and 4th holes to fall back to 10-under-par for the tournament, but he still shared the lead with George Coetzee.

At one stage, his frustration got the better of him and after finding a bunker with a tee shot that he didn't like, he asked one of the cameramen on the golf course to "give it a rest."

It appeared that Rahm did not want the camera in his face after he had made another mistake on his back nine, but it is attention that is expected as he is the recent US Open champion and new World No. 1.

The six-time PGA Tour winner has always had a fiery style on the course and you could see his passion when he rolled in his superb birdie putt on the 18th hole at Torrey Pines to win his first major title.

@JustinThomas34 spitting all over the tees at The Renaissance Club and @JonRahmpga whining at the camera like an entitled little brat is the type of behaviour we’ve come to expect from privileged professional golfers. Golf is on a slippery slope as entertainment. @SkySports

Having been on the receiving end (erroneously) of @JonRahmpga slabbering at media doing their job after he hits a bad shot, I'm not surprised to hear him doing it again to a cameraman @ScottishOpen Grow up and own your mistakes! pic.twitter.com/ZC8Xk6Ux28

@JonRahmpga giving out to camera man doing his job. You weren't when you were on your birdie streak....I thought we seen the last of petulant Jon ...

Poor from Jon Rahm regards camera man he just doing his job . Sky had any guts he would not b shown again today .

NEXT PAGE: GOLF FANS REACT TO RORY MCILROY'S CLUB BEING KNICKED BY A RANDOM MAN!