Justin Thomas wore a pair of controversial golf joggers in the third round of the Valspar Championship and many of our readers had strong opinions on his clothing. 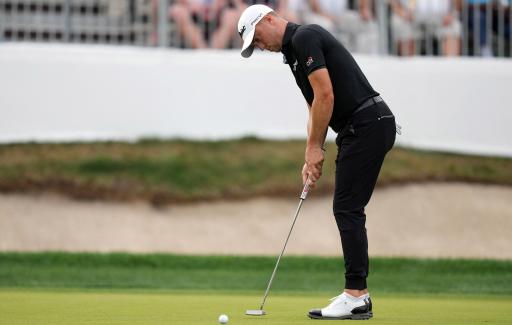 Thomas, who finished tied third at the Copperhead Course and one shot behind Sam Burns and Davis Riley, wore a dark pair of golf joggers on Saturday when he shot a 66.

Players such as Erik van Rooyen and Rickie Fowler have worn them in previous years on the PGA Tour, but Thomas is the first player of note to wear them in public for a significant period.

Along with golf hoodies and collarless shirts, golf joggers represent the latest emerging trend in the game that has made people turn their heads and take notice.

When we spoke exclusively to DP World Tour player Richard Mansell, he explained to us that brands such as adidas and players such as himself are prepared to push boundaries in dress code in order to encourage young people to take part.

Related: Rory McIlroy is now the OLDEST player in the TOP 10 of World Rankings!

"Last year, I wore the three-quarter trousers, or with my ankles out, and a lot of the guys won't wear that sort of thing. Obviously with this day and age, with hoodies and that sort of thing, adidas are trying to move the needle," Mansell said after wearing the adidas adicross range during the Ras al Khaimah Championship.

"I really like it, I feel comfortable in it. It's what I'd wear back home if I was playing golf and I'd have no issue with going to the pub afterwards with some mates in it, whereas in some golf clothes you would because you'd feel like a golfer. It's aimed at young people."

This opinion was shared by many golf fans and many readers of GolfMagic. However, some people are against golf joggers. Take a look below at some of the contrasting comments.

"Wouldn't get away with them on our course," one fan said.

"The world needs to relax. If you don’t like them don’t watch," another fan said.

"They're a lot more things people need to be worrying about. Not what somebody is wearing" one fan commented.

"Does it affect his or anyone's game? No, carry on, nothing to see here. Golf snobbery is exactly what's wrong with the game of golf," another fan commented.

"I don't understand how they are allowed to wear these but not shorts... I'm not against jogging bottoms but how can these be fine and shorts are a big no no," one fan argued.

"Just goes to show the game of golf's evolution," one fan said.

"Wasn’t a fan… but to each his own," another fan said.