Joel Dahmen finished his final round at the Valspar Championship and immediately switched into spectator mode to watch his friend Sam Burns. 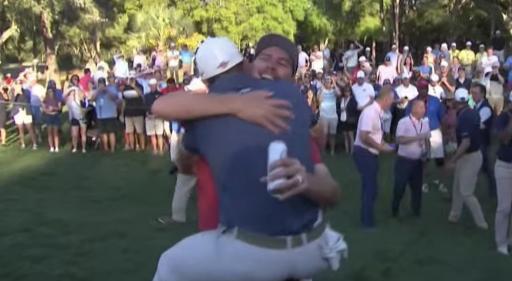 Joel Dahmen is one of the biggest personalities on the PGA Tour and he showed this once again at the Valspar Championship at the weekend.

Dahmen shot a tame score of 1-over-par in the final round at Innisbrook Resort to finish in a tie for 39th place. He finished 12 shots behind Sam Burns and Davis Riley.

The one-time PGA Tour winner whipped off his golf clothes and shoes and put on his normal clothes after his round. He grabbed a drink and headed back out to the golf course.

Luckily for Dahmen, he saw a thrilling finish. His friend Burns holed a lengthy birdie putt on the second playoff hole to beat Davis Riley at the Copperhead Course.

This led to jubilant scenes for Burns who had just won his third title on the PGA Tour and his second consecutive victory at the Valspar Championship.

Related: Sam Burns had the perfect answer when asked about showing rare emotion

Looks like Joel Dahmen snagged a White Claw and got out there to watch some playoff action at the Valspar pic.twitter.com/HqcCrYp2rg

As you can see in the pictures above provided by Dylan Dethier, Burns ran off the hole and into the arms of Dahmen who was still intently holding on to his drink.

Dahmen looked delighted with Burns' victory which has lifted him into the world's top 10 for the first time and into second place in the FedEx Cup standings.

This was arguably the best moment of his career to date. For Dahmen, his best moment came in 2021 when he won the Corales Puntacana Resort & Club Championship.

As well as being a huge personality, Dahmen also has a caddie who is equally as outgoing and entertaining as he is. They are the perfect team.

Geno Bonnalie often posts videos of his exploits on the PGA Tour, including reviews of his hotel rooms and updates on his travel.