Michael Visacki couldn't hold back the tears as he called his father to tell him he has qualified for this week's Valspar Championship. 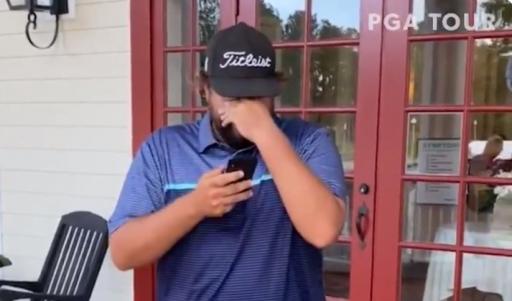 For some of the best players in the world, making it onto the PGA Tour might not have been too difficult and at a young age they quickly found themselves playing for big money at huge tournaments, but for others, making it onto the big stage is a long grind that takes many years and some of them never even make it.

Michael Visacki turned professional seven years ago and since then has been doing his best to qualify for a PGA Tour tournament and encountered plenty of near misses at Q School.

On Monday, the 27-year-old sank a 20-foot putt to qualify for this week's Valspar Championship, his first ever PGA Tour event and whilst calling his father to tell him the news, Visacki was overwhelmed with joy.

WATCH VISACKI CALL HIS FATHER BELOW:

Michael Visacki fights back tears as he tells his father that he's reached a lifelong goal of competing on the PGA TOUR.

It was a brilliant moment for golf fans to watch, as many will be unaware of the amount of hard work and dedication these players put in to make their dreams come true and for Visacki, it's been years in the making, with many heartbreaking moments.

Visacki, who has been playing on the West Florida Golf Tour, will tee it up at the Valspar Championship where some of the best players on the planet are in the field, with Dustin Johnson and Justin Thomas both returning to action, along with multiple other major champions, including Patrick Reed, Bubba Watson and Justin Rose.

NEXT PAGE: How much Cameron Smith, Marc Leishman and the rest won at the Zurich Classic