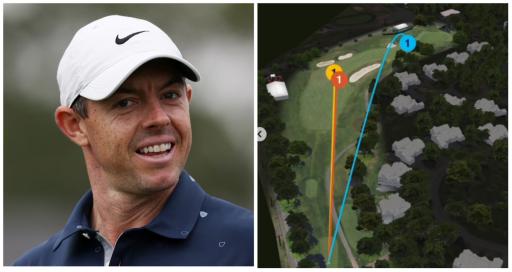 Rory McIlroy raced into the early lead at the Travelers Championship at TPC River Highlands.

He says he’s not got a point to prove as the war escalates between the PGA Tour and LIV Golf, but it’s hard to believe that the Northern Irishman isn't pumped up a little bit at the minute.

Still, at the par-4 ninth hole in Connecticut something hilarious happened. He outdrove his playing partners by a combined 163 yards.

In truth, there were plenty of reasons why he did so. McIlroy absolutely bombs it and his playing partners Webb Simpson and Kevin Kisner aren’t exactly renowned for hitting a long ball.

Still, just look at this:

McIlroy took the aggressive line off the tee at his last hole of the day after starting on the back.

One has to wonder what Simpson and Kisner were thinking to themselves as they strode up to their golf balls.

Of course, they did take less club off the tee. But still, that is hilarious.

That drive went 332 yards and left McIlroy only 44 yards into the green. McIlroy went on to make a closing birdie to cap off a bogey-free 8-under par 62.

He later told the media that he is not playing with a point to prove.

“Whether that gives me a little more confidence to speak up on certain issues, maybe.

“But I'm just going out there trying to play my game and trying to win some more tournaments.”

Earlier in the week McIlroy admitted surprise that Brooks Koepka had departed the PGA Tour in favour of LIV Golf.

He described that as “pretty duplicitous”.