Rory McIlroy is our "Harvey Dent" and I feel bad for him, says Max Homa 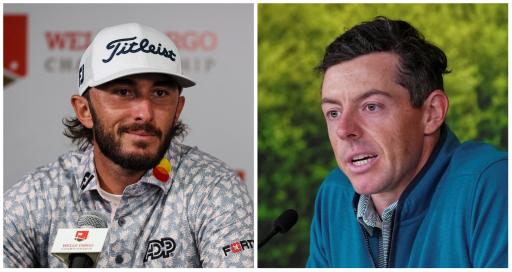 Four-time PGA Tour winner Max Homa has leapt to the defence of “Harvey Dent” Rory McIlroy, claiming the Northern Irishman is "pushed" into "talking s---" about other players.

Homa recently joined the No Laying Up podcast to discuss all things PGA Tour and LIV Golf where he admitted that even though the Greg Norman-led tour can buy golf they cannot “buy my hopes and dreams”.

Earlier this week McIlroy, 33, spoke of his surprise that Brooks Koepka decided to turn his back on the PGA Tour in favour of the Saudi-backed series despite previously stating his desire to remain on the established American circuit.

McIlroy described that move as “pretty duplicitous” because of what Koepka has allegedly been saying in private.

Still, McIlroy told the media yesterday after a stunning opening round at the Travelers Championship that he’d rather speak honestly about situations rather than give “mundane answers”.

Sometimes it’s to his detriment, he conceded.

Homa, who repeated his win at the Wells Fargo Championship in May, explained that he “felt sorry” for McIlroy as he has been chomping at the bit to have his say.

But unfortunately for Homa he has not been given “major” press conferences where he can echo the sentiments of players who are behind the PGA Tour.

Homa told the podcast: “I feel really bad for Rory. He should not have to do this week in and week out. He’s doing an amazing job.

“It scares me in a way – to all the big Batman fans out there like me – he’s kind of our Harvey Dent right now and he shouldn’t have to keep sticking his neck out.

“I’m sure he’s friends with Brooks. They live down by each other. They are both elite golfers. They have been around each other a lot. He shouldn’t have to talk s--- about him.

“They’re kinda pushing him to say something bad about him. And that’s not his job.”

Homa said that he has been wanting to have his voice heard a bit more.

“You can buy a tour for sure, but you can’t buy my goals and my dreams.”@maxhoma23 sounds off on the latest LIV developments, his motivations, PGA Tour news, and a lot more.

He pointed to his lowest point in golf at an Adams Tour event having previously played on the PGA Tour.

It was a humbling feeling, the 31-year-old said.

But it inspired him to get back and play on the PGA Tour and one day play in the Presidents Cup and Ryder Cup.

“I never dreamt of money, and I mean that sincerely,” he said.

“I think that is a big part of this whole thing. You can buy a Tour, for sure, but you can’t buy my hopes and dreams. I think a lot of guys do have that.”