In Gee Chun leads by five shots after the first round of the KPMG Women's PGA Championship and she stunned Justin Thomas with her performance on Thursday. 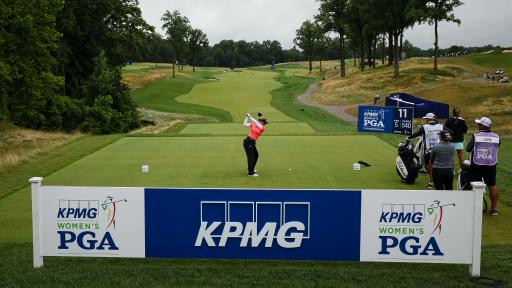 In Gee Chun put on a historic display in the first round of the KPMG Women's PGA Championship, opening up a five-shot lead on 8-under-par.

The South Korean carded nine birdies on her way to a superb 64. She has opened up a sizeable gap to Pornanong Phatlum and Hye-Jin Choi in tied second place.

As reported by top statman Justin Ray, she was beating the field average by 12.08 strokes at one stage. To put this into context, Rory McIlroy gained 9.11 strokes on the field in the opening round at Congressional in the 2011 US Open.

Chun led by seven shots at one point on Thursday on Congressional Blue Course in Maryland and her lead of five ties the record for the largest first-round lead in women's major history.

Ray also reported that 32 of the last 34 women's major winners were at least within four shots after 18 holes, which would suggest Chun's advantage could be unassailable.

It was a record-tying day at Congressional.

Here’s how things stand heading into the second round of the #KPMGWomensPGA.@ROLEX pic.twitter.com/x79gtJB3fC

One man who was mightily impressed was none other than two-time men's US PGA champion Justin Thomas who watched some of the action last night.

"I can’t stop staring at the leaderboard. Leading by 7 halfway thru day 1!!!!" Thomas tweeted on Thursday evening. He was as flabbergasted as the rest of us.

Thomas had planned to play at the Travelers Championship this week at TPC River Highlands, but a back injury ruled him out of participation.

Chun is well on her way to winning her third major title. She won her first one at the US Women's Open in 2015 and she doubled her tally the following year at the Evian Championship.

The 27-year-only has three wins on the LPGA Tour despite double major victories. She won the LPGA KEB Hana Bank Championship in 2018.