"Greatest team ever - We DEMOLISHED them!": Bryson DeChambeau on Ryder Cup

Bryson DeChambeau labelled the 2021 US Ryder Cup team as the greatest team in the tournament's history. 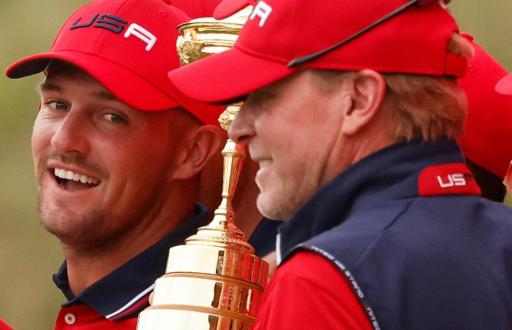 Bryson DeChambeau described the winning US Ryder Cup team of 2021 as the best side in the tournament's history.

Speaking on the Full Send Podcast, DeChambeau said that being on the losing Ryder Cup side in 2018 was a "rough" experience, but America turned their fortunes around at Whistling Straits.

DeChambeau delivered 2.5 points for Steve Stricker's team, including an emphatic victory against Sergio Garcia in the Sunday singles. Team USA won by a record-breaking score of 19-9.

"I played over in Paris and we got our a**** handed to us, that was a bit rough and I do not want to feel that again.

"He's such a good player. He's never won on tour, he will win on tour. He was a rookie at the Ryder Cup but he felt like a veteran, it was super sick.

"We all just came together. The most important thing about the event is that as a country we came together. We have been struggling for a long time in this country, we needed a little gusto and a little jump and the Ryder Cup provided a little bit of that."

The 28-year-old commented on the togetherness of the team, which has been the main point of criticism aimed at previous US Ryder Cup teams and a point of praise for Team Europe.

The truce between DeChambeau and four-time major champion Brooks Koepka personified the cohesion of the US team. The pair shared a hug in the post-victory media session.

The famous feud has dominated the PGA Tour in 2021, but DeChambeau described on the Full Send Podcast how the tension began in 2018.

"He was a d*** to me in 2018 over the slow play stuff that happened. I took a long time over a putt but it was because there were guys in the fairway, we had time," DeChambeau added.

"The golf world goes crazy because I took two minutes to hit a putt and backed off from it once or twice and that was when I was definitely slower. I have improved that since then.

"He took a shot at me then and I said 'dude that's ridiculous, we're all just trying to do our best out here, come on don't be that type of person'. So from then on, it was always a sticking point.

"We had mutual respect at that point (hugging at media session), I think things have changed a little bit. There will always be a competitive nature and - we're always going to be trying to kick each other's a****, which is a good thing. I've got nothing against him."

There will certainly be competition when the pair face off in a 12-hole match at The Wynn Golf Club in Las Vegas on November 26.

NEXT PAGE: BRYSON DECHAMBEAU VS BROOKS KOEPKA CONFIRMED AS FIFTH EDITION OF THE MATCH