Tiger Woods is not just an outstanding professional golfer, but he was also an incredible amateur that was always destined for greatness. 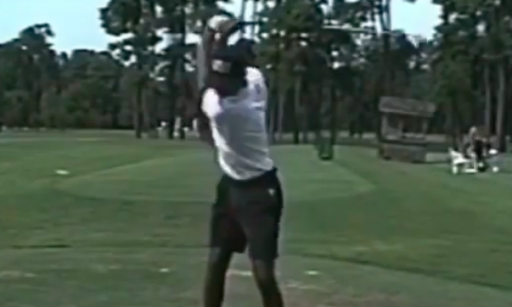 The career of Tiger Woods has been public since he was a young child. He was simply born to play golf.

His 15 major championships and 82 PGA Tour titles are a result of an incredible upbringing in the sport and nothing short of a sensational amateur career.

In this new footage that has emerged, Woods is seen performing his immaculate golf swing at the young age of 17 and it really is a thing of beauty.

The use of his power and flexibility appears effortless and in 1993, this was the period in which he was taking the amateur golf world by storm.

Between 1991 and 1993, he won the US Junior Amateurs consecutively and in 1994, he became the youngest ever winner of the US Amateur at TPC Sawgrass aged just 18.

He made the cut in four of six major championships he appeared in as an amateur and he was low amateur at the 1995 Masters and the 1996 Open Championship.

With the impressive swing he shows in the footage above, all of this success in his early career is hardly surprising. In 1996, he won the NCAA Championship at Stanford and he was named Collegiate Player of the Year.

In the same year, he won the Las Vegas Invitational and the Walt Disney World/Oldsmobile Classic. And as they say, the rest is history.

It is always great to see footage like this where Woods is a spritely young golfer. He very much set the standard as a 17-year-old and in terms of success, he still sets the standard in the modern game.

NEXT PAGE: "THE BEST 5 MINUTES OF MY LIFE": YOUNG GOLFER LIVES DREAM ALONGSIDE TONY FINAU