Tiger Woods was speaking about what changes could possibly be implemented to solve golf's problem with distance. 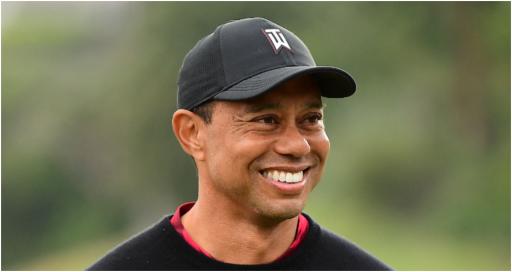 Tiger Woods believes there is a simple solution to golf's distance problem: adding spin to the golf ball.

Woods was asked about bifurcating golf's rules over the weekend and he believes that nothing should be done to hamper amateurs' enjoyment.

Though it's fair to say he believes that something should be done, saying to Sir Nick Faldo: "Add spin to the golf ball. That's a way to shorten it up as well."

His comment was made after Faldo suggested perhaps trying to limit the size of the driver. Changes have already been implemented by golf's governing bodies.

On 1 January this year, a new model local rule was implemented to reduce the maximum length of the driver shafts from 48 to 46 inches.

Phil Mickelson has already been outspoken on the subject of this before. He described the change as "stupid".

He compared golf's governing bodies with a hat tip to Forrest Gump, saying: "Stupid is as stupid does".

Justin Thomas, similarly expressed dismay over that change, suggesting that golf need to look at the "arm bar" putter first.

Thomas previously said: "I feel like there's a lot of other things, you know, like the arm bar putter that they should be approaching as opposed to the length of driver.

"I think the fact that you see only a few people using a long driver speaks for itself, that it's not really that big of an advantage. It's a lot harder to hit it straight."

Woods, 46, began his playing career with a very different type of golf ball he now uses. He started out with a balata golf balls and experienced the significant changes that came with the urethane-covered ball.

Graeme McDowell claimed that Woods had an advantage over the field in his infamous 2000 "Tiger Slam" year.

"They should have been worried a long time ago, but the genie's out of the bag now," he said.

"It's about what do we do going forward and how soon can they do it, but I don't know if you're going to stop the guys who are there right now.

"Guys are figuring out how to carry the ball 320-plus yards, and it's not just a few of them.

"There are a lot of guys who can do it, and that's where the game's going. There's only going to be a small amount of property that we can do … where we can alter golf courses.

"I just don't see how they can roll everything back. I would like to be able to see that, as far as our game, but then we go back down the road of what do you bifurcate, at what level?"

Next page: Patrick Reed accused of being up to no good