Hideki Matsuyama got a terrible bit of luck on the 18th hole when he was all-square with Sam Burns in the Sunday singles of the Presidents Cup. 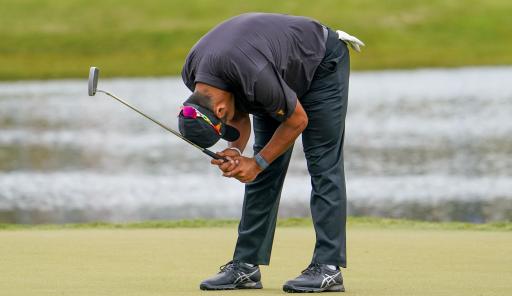 Hideki Matsuyama didn't know it when he reached his ball in the left rough on the 18th hole on Sunday, but he received a horrific piece of luck in his President's Cup match against Sam Burns.

In what was a mouthwatering fixture in the Sunday singles, Matsuyama and Burns had a great match that the Japanese star led 2 up after nine holes.

Matsuyama's drive was heading left, but his ball would've finished in the fairway or a few feet from the short grass had the marshal not been stood at the exact point where his drive landed.

Marshal of the Year. Patriot. pic.twitter.com/gucffm6GQX

The ball of the former Masters champion hit the marshal in the knee and rebounded roughly another 10 to 15 yards left. This left Matsuyama with a very tricky approach over trees with Burns in the middle of the fairway.

He muscled his ball out the tough Quail Hollow rough through the green and his chip rattled the bottom of the pin and stayed out. If Matsuyama's chip dropped for a birdie and converted the half into a win, the afternoon could've had a very different complexion.

On his fifth appearance for the International team, Matsuyama earned 1.5 points. He and Adam Scott beat Cameron Young and Collin Morikawa 3&2 in the Saturday foursomes, but the same pair were beaten 6&5 by Patrick Cantlay and Xander Schauffele in the Thursday foursomes.

When Matsuyama and Burns settled on their shared point, the scores were 13.5-8.5. It was a race against time for who would win the trophy for America and it ultimately fell to Schauffele who beat Corey Conners on the 18th hole.

Matsuyama is still winless in the Presidents Cup, but it was always going to be hard to turn the American tide when the likes of Cameron Smith, Joaquin Niemann, Louis Oosthuizen and Abraham Ancer moved to LIV Golf.