Tiger Woods Update: Tiger caddies for son Charlie Woods, but he is still walking in a lot of discomfort. 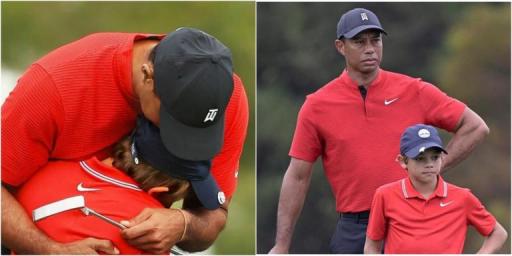 Tiger Woods was on hand to caddie for his son Charlie Woods in a junior golf tournament over the weekend but reports on the ground suggest the former World No.1 is still limping around in discomfort.

Woods, 46, was pictured at the tournament with a black protective sleeve on his right leg and it is understood that he used a golf cart to get around the course caddying for his young cub Charlie, 13.

I just confirmed with the guy he took the pic with that he carted around but they added that he didn’t look right. https://t.co/NLZQfVl7vw

"I just confirmed with the guy he took the pic with that he carted around but they added that he didn't look right," tweeted the popular TW Legion account that regularly posts updates on the life of Tiger Woods.

Playing in the boys aged 12-13 section, Charlie Woods shot a round of 80 on Saturday but he carded his lowest career round thus far on Sunday with a brilliant 4-under 68.

A career low round for Charlie Woods!

Tiger was his caddie for the day too pic.twitter.com/9ZLxLaQv1n

It was also confirmed in his first ever interview that he almost made an albatross on the par-5 14th hole.

The young star, who came second in the PNC Championship with his father on the PGA Tour in 2021, finished tied fourth and 11 shots behind Darren Zhou from Hong Kong.

#NEW: A Charlie Woods interview following his low round of the day at the Notah Begay qualifying event in central FL . Tiger was on site. pic.twitter.com/FDbFRgzZ6n

Woods returned to competitive action earlier this season after having nearly lost his life in a car crash in Los Angeles in February 2021.

The 15-time major champion competed in three of the four majors this season.

Woods finished 47th at The Masters, withdrew after three rounds at the US PGA and then missed the cut in the 150th Open Championship.

Emotions ran high for Woods and the rest of the golfing world at St Andrews in his last competitive start.

Woods, who was reduced to tears walking down the 18th hole, told the media that it may be his "last Open" at the Home of Golf.

He is currently ranked 1,184th in the Official World Golf Rankings, which continue to frustrate those on LIV Golf as their tournaments are still not receiving any ranking points.

Woods' caddie Joe LaCava recently provided an update on when we can next expect to see him in action, and his potential playing schedule for 2023.

LaCava thinks Woods could play up to four tournaments before The Masters in April 2023.