Hot Hideki Matsuyama: Do the stats show the way for his eighth PGA Tour win?

Hideki Matsuyama is two shots behind Russell Henley at the Sony Open, but these statistics point in The Masters champion's favour. 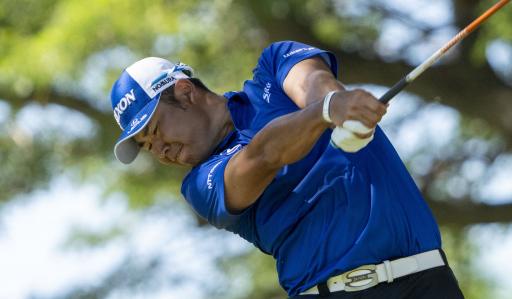 Russell Henley has shown the way so far at the Waialae Country Club. He led by three after 36 holes and now he leads by two after 54. But Hideki Matsuyama is in hot form.

The Masters champion shot a bogey-free 63 to reduce a deficit of six shots to two behind his American opponent. It was his 12th consecutive round in the 60's.

It is not just Matsuyama's recent form that stands him in good stead at the Sony Open, but his record at this type of course and this length of course as well.

Waialae Country Club is a 7,044-yard par 70 golf course. It was designed by Seth Raynor and it has hosted the event since 1965. It is significantly flatter and narrowed than Kapalua, which hosted the Sentry Tournament of Champions last week.

Hideki Matsuyama fires a 63 at Waialae today, now 1 back of the lead.

Matsuyama on courses under 7,100 yards the last 2 PGA Tour seasons:

In the last two seasons, Matsuyama has played 11 rounds at courses of under 7,100 yards. In these rounds, he has a scoring average of 65.8 and he has hit 79.3% of greens in regulation.

Also, he has a 46-under-par total for this stretch too. Matsuyama excels at these venues and if he could produce a score of 65 or 66 on Sunday, this could make it very difficult for Henley to match.

The 29-year-old has relished the conditions this week in Hawaii and also enjoyed the support of the crowd.

"Putting was my strong point today. Even my missed putts found the hole. I was lucky today," Matsuyama said after the third round of the Sony Open.

RELATED: RORY SABBATINI HAS A NEW TATTOO & IT HAS A SPELLING ERROR...

"Whenever there is a big crowd like this it just gives you some extra motivation, and just kind of rode with all their cheers and hopefully tomorrow will be another good day."

Matsuyama has won seven times on the PGA Tour with his most recent win coming at the ZOZO Championship. He shot 65 in the final round of that event.

Henley, the winner of the 2013 Sony Open, will be looking to convert a 54-hole lead for just the second time in his career. It will be his sixth attempt on Sunday.

Matsuyama has the pedigree, quality and experience to win again on the PGA Tour. It certainly makes for an interesting final round.

NEXT PAGE: PGA TOUR: WHY PLAYERS ARE WEARING PURPLE RIBBONS AT SONY OPEN