Rory Sabbatini has a new tattoo & it has a spelling error...

Rory Sabbatini was sporting a new tattoo at the Sony Open on the PGA Tour, but it looks like there might be a problem... 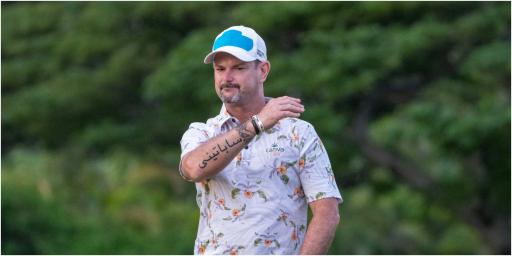 Rory Sabbatini played the first two rounds of the Sony Open with a patch covering up what was a sponsor's logo.

Earlier in the week he was seen showing the brand, now he has covered it up with a thick piece of blue tape.

But perhaps what should be getting more attention is the new (we presume) tattoo on his right arm.

he opted for the single B spelling it appears pic.twitter.com/4owoXkX2Ux

Yet there appears to be a problem: apparently it has a spelling error.

The tattooist apparently missed out the two dots underneath the last character, meaning it only translates to one B.

Will he want to get this fixed? Or did he want it to say: "Sabatini".

Sabbatini, 45, drew headlines late last year on the PGA Tour when he was disqualified for having a non-conforming club in his bag.

That was just three little white dots he left on his club face which are used to track how far he hits the ball on launch monitors.

As you can no doubt imagine, he wasn't best pleased that he managed to leave the white stickers on.

1. Rory Sabbatini started wearing a "Centinel Spine" hat at the 2019 Valspar
2. Last summer, switched to "Viscogliosi Bros." hat
3. VB is a PE firm focused on health care, owns Centinel, and it closed its IPO on Tuesday
4. Sabbatini's hat looked like this Thursday and Friday https://t.co/zC5hIorHYp pic.twitter.com/Jj4nluPBsQ

Sabbatini won the silver medal at the 2020 Tokyo Olympics and also grabbed headlines for another tattoo he has.

The 'LLL' tattoo was compared to a white supremacist group.

His wife hit back at critics, previously suggesting this was complete and utter nonsense.

LLL stands for love, laughter and loyalty, she said.

Sabbatini was born in South Africa and represented them until 2018 when he adopted his wife Martina Stofanikova's Slovakian nationality.

More: Hideki holes out with an outrageous flop shot