Russell Henley still holds a healthy lead with 18 holes remaining at the Sony Open, but he has The Masters champion Hideki Matsuyama breathing down his neck. 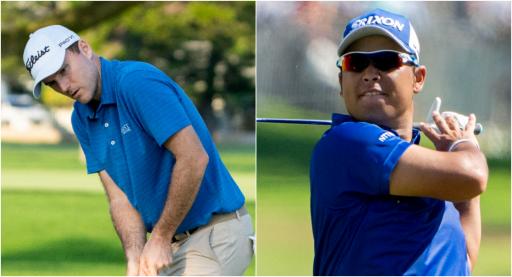 Russell Henley is in superb shape once again to win his fourth PGA Tour title as he leads by two shots with one round remaining of the Sony Open.

Henley, who won this tournament in 2013, entered the third round with a three-shot lead and although he bogeyed the fourth hole, he bounced back with birdies at the 7th and 9th holes.

Henley made another birdie at the 11th hole and despite giving one back on 13, he found two more birdies in his final four holes to finish with a solid 67.

He enters Sunday on 18-under-par, but Hideki Matsuyama is due to apply extreme pressure at Waialae Country Club in the final round after his Saturday showing.

RELATED: WHY PLAYERS ARE WEARING PURPLE RIBBONS AT SONY OPEN

The Masters champion began the third round six shots adrift of the American on 9-under-par. He started well with a birdie on 2 and like Henley, he birdied the 7th and 9th holes to reach 12-under-par.

Back on top.@RussHenleyGolf has the solo lead once again. pic.twitter.com/jsEfRL1wSh

Looking for his eighth victory on the PGA Tour, the Japanese star stormed home with four birdies in his last seven holes, including one at the 18th.

His bogey-free 63 was his 12th consecutive round in the 60's and he ended on 16-under-par for the tournament. Adam Svensson, Matt Kuchar, Haotong Li and Seamus Power are four shots back of Henley in tied third place.

"It’s tough. I’ve slept on a few leads the last couple years. It’s hard. I struggle to sleep. I'm already not the best sleeper," said Henley, who has only converted one of five 54-hole leads on the PGA Tour.

"Gosh, my first two wins were my first two years on tour and this is my 10th season, so got to remember back a few years for those. But I definitely believe I can do it. But it’s sure hard to do.

"I've had some tough finishes, tough to swallow. It's a tough game."

Matsuyama, 29, is looking for his second win of the 2022 season after he won the ZOZO Championship on home turf back in October.