How did Hideki Matsuyama not make the Top 10 in the PGA Tour PIP? Oh yeah... 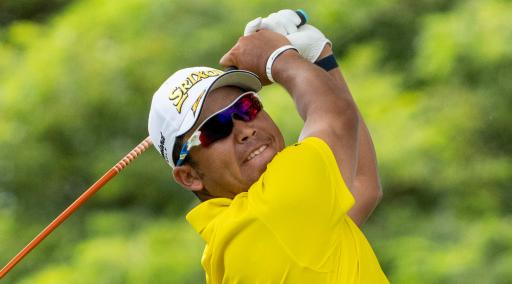 Hideki Matsuyama fans have been up in arms today after seeing Japan's favourite son and the reigning Masters champion fail to even secure a Top 10 spot in the PGA Tour's inaugural Player Impact Program.

Tiger Woods was named as the winner of the PIP race, earning $8 million in the process having played in just one golf tournament all year - and that was an unofficial father-son tournament alongside his son Charlie Woods.

Phil Mickelson finished second, despite telling everyone he had won it at the end of the year.

Woods had some fun with that on his Twitter page earlier today.

PIP isn't an outright social media competition before you ask, otherwise Ian Poulter and Max Homa would be one and two right now.

The program is all about a player's impact and bringing as much attention as possible to the PGA Tour based on five points as we will discuss more below.

The omission of Matsuyama might seem a strange one on first glance, but when you delve deeper into the rules and regulations of this new bonus program you sort of begin to understand why he missed out on an additional pot of gold.

Of the top 10 players who split a PIP prize of $40 million - which will extend to $50 million this season - eight of them are from USA, with third-placed Rory McIlroy from Northern Ireland and ninth-placed Jon Rahm from Spain.

Matsuyama is lauded by just about everyone in his home country and it's fair to say he has no bigger "impact" than any other Japanese sports person, especially last year when becoming Japan's first-ever men's major champion with victory at The Masters.

The win for Matsuyama was considered by Japenese golf media - and golf media at large for that matter - as a game-changing moment for both Japanese and Asian golf. And who will ever forget that powerful image of his caddie bowing on the 18th green.

The downside, at least from an American TV perspective, was that ratings in the country were down for a Masters Tournament. Very down, in fact.

Following that monumental moment for Asian golf, Matsuyama then continued his stellar form on the PGA Tour and went on to bring the house down in his homeland when landing victory at the ZOZO Championship in October.

It was his greatest season to date and he was arguably one of the most impressive performers of the PGA Tour season.

Then again Morikawa won The Open and Patrick Cantlay won the FedEx Cup, and yet they both failed to break the Top 10.

But remember, PIP isn't about your golf. Just ask Tiger, and Bubba.

Matsuyama, who is now ranked 11th in the world as he heads into this week's Arnold Palmer Invitatonal at famed Bay Hill, also won the Sony Open earlier this year to continue his impressive run of form the past 12 months.

But for all the "impact" Matsuyama has on his sport back home in Japan, unfortunately for him that matters little when it comes to the PIP.

Well just check out point five in the PIP criteria, with specific reference to the "broad US population" part.

That would likely explain why eight of the top 10 are from USA.

No Morikawa and Cantlay might be surprising to some of you, but it's fair to say while they are two of the world's best golfers right now, they tend to do their talking on the course rather than off it.

Cantlay even admitted to the media recently that he would likely find it difficult to ever make anything in the PIP race under the current criteria, especially when he lives a relatively quiet life outside the ropes.

The same can be said of Morikawa, too.

A bigger surprise from the Top 10 you could argue is Homa, especially given he is American and a part-time comedian.

Anyway, the PGA Tour makes the rules and it has decided on its Top 10.

At least we eventually got to see the list.

It is fair to say a number of Hideki fans were not best pleased with the results, though.

Check out some of their tweets below.

If you’ll allow me a rare serious tweet: the fact that this program only measured impacts with English speaking audiences is both shameful and short sighted. The @pgatour owes Hideki Matsuyama an apology and at least $3m https://t.co/850OFVbh3g

It's almost as though the PIP is a thinly-veiled kickback scheme conjured up to reward a small subset of US players that represent threats to leave for a competing tour.

If a Japanese player can WIN THE MASTERS and not make the top 10 PIP, what's the point?

Would be interested to see where Hideki Matsuyama – Masters champ and huge press following – fell in the final PIP standings...

Hideki should’ve been no worse than 5th on this list

And the US market is falling in love Hideki. A couple more majors and PIP money is just private jet money for him, he could become the most famous golfer in the world.

I mean that photo of his caddie alone

Sorry Hideki, your impact only counts in Japan.

Next Page: If Phil Mickelson had just said THIS then he might have been okay