If Phil Mickelson had just said THIS then he might have been okay...

PGA Tour pro Pat Perez believes if Phil Mickelson had been more careful with his words then the Saudi Golf League may have just worked for him. 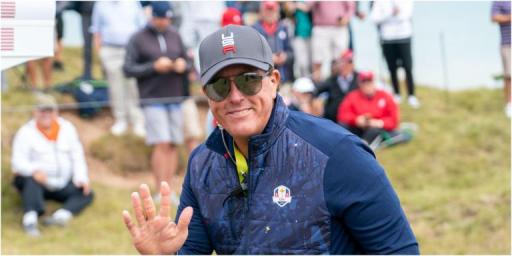 PGA Tour pro Pat Perez believes Phil Mickelson would have a lot more success with breaking away to a new Saudi Golf League had he been more careful with his words.

Golf biographer Alan Shipnuck released an excerpt of Mickelson's words surrounding the subject of the PGA Tour and Saudi Golf League two weeks ago following a conversation they shared back in November.

Shipnuck, who will release a new book on Mickelson in May, claims Lefty told him that he didn't pretend to be excited about "hitching his fortunes to Saudi Arabia".

Mickelson believed his comments to Shipnuck had been made off record, while Shipnuck said they were on record.

"He could have done this in such a different way," said Perez, speaking on GOLF's latest episode of Subpar with co-hosts Colt Knost and Drew Stolz.

"He could have gone, ‘You know what, I made a fortune on the PGA Tour, God bless the PGA Tour for taking care of me and giving me a place and this and that, but I feel like I want to go down this other route to kind of close out my career. Thank you everybody, it’s been phenomenal. But you know what, thank you Jay [Monahan] and everybody else and Tim Finchem and all these other guys from the PGA Tour, but I think I’m going to go down this route. Goodbye.’

"That would have been very easy."

Related: Alan Shipnuck reveals he has yet more "damaging information" about Phil Mickelson

Perez also hit out at Mickelson for attempting to line his own pockets without a care in the world for other PGA Tour players.

"If he was actually trying to help the players and this and that, he did it completely wrong," said Perez.

"I don’t know how he could have done it more wrong. You are not leveraging to use the Saudi group to get us more money. You are trying to fill your pockets; you were trying behind everyone’s back to get players to sign so you could get your big golden paycheck in the end and then take off."

Next Page: Phil Mickelson was WRONG after all as Tiger Woods wins the PGA Tour PIP race in 2021