Peter Kostis didn't take kindly to an innocent comment that Tiger Woods made about the Champions Dinner this year at The Masters. 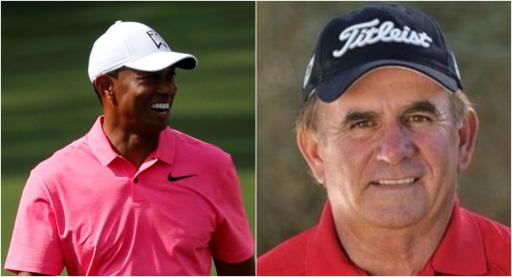 Peter Kostis was blasted by golf fans for comparing a Tiger Woods comment from the Genesis Invitational to a comment made towards him in 1997.

While speaking to Jim Nantz and Sir Nick Faldo in the commentary booth at the Genesis Invitational, Woods was unsure if he would play at Augusta National but he confirmed his attendance at the Champions Dinner.

"It'll be a great dinner, I don't know what kind of sushi we're going to have!" Woods joked. The winner of the previous Masters decides the menu for the following year.

Hideki Matsuyama became Japan's first male major winner at Augusta in 2021, so the 15-time major champion may have been referring to sushi being a popular dish in Japan.

This is what Kostis pulled up. The golf analyst and instructor tweeted and compared the situation to a comment Fuzzy Zoeller made in 1997.

Related: How did Hideki Matsuyama not make the top 10 in the PGA Tour PIP? Oh yeah...

I find it interesting that Tiger jokes about sushi at Hideki's champions dinner and everyone laughs. Fuzzy jokes about fried chicken for Tiger's dinner and he gets hammered. just sayin...

Just after Woods won The Masters 25 years ago, his first major title, Zoeller made a controversial comment which mentioned a racial stereotype.

"So, you know what you guys do when he gets in here? You pat him on the back and say congratulations and enjoy it and tell him not to serve fried chicken next year. Got it. Or collard greens or whatever the hell they serve."

Kostis suggested that if one comment was met with hostility and the other was met with laughs, then this isn't fair. However, many golf fans disagreed with his opinion.

Are you familiar with the nation of Japan

One is a national culinary staple and the other a racist stereotype that dates back 150 yrs. I’m a Swede who eats Swedish meatballs and lingonberry sauce at least once a month. America’s national dish is the hamburger. Japan is best known for sushi. England for Yorkshire pudding.

Wow. Step away from the computer.

Maybe because Fuzzy was being racist and Tiger was making a joke. I don’t know..just sayin’

Ummmmm - you totally misread that one Peter. Fuzzy clearly made a racist trope; Tiger was referring to the preferred dish of the Japanese nation.