Fred Couples has revealed how he played a practical joke on Tiger Woods that lasted more than two years which began at the 2009 Presidents Cup. 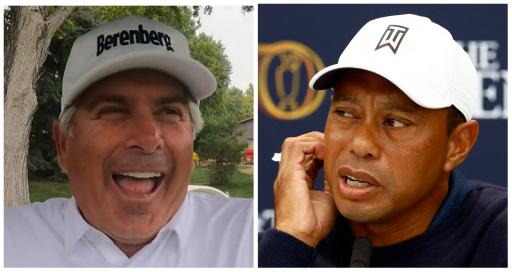 Tiger Woods was on the receiving end of a brilliant practical joke that was orchestrated by Fred Couples.

Cast your mind back to the 2009 Presidents Cup and Couples was the captain for the United States going up against Greg Norman's International side.

Couples, who has been consistently outspoken against LIV Golf in recent months, emerged as the winning skipper as the Americans dominated at Harding Park in San Francisco.

As with the Ryder Cup, each captain has to select one player to sit out the Sunday singles if a competitor gets injured.

Each @PresidentsCup, the captains select a player they're willing to sit in case the opposing team has an injury.

The full story, as told by Freddie Couples...

"[At the] 2009 Presidents Cup, I'm the captain, first time captain. We got Tiger Woods on the team. We got everybody on the team.

"So, at the begining of the week, in case of an injury you put a name in an envelope. So, I'm the only guy in the room with [Greg] Norman, he puts in a name and I put in a name and we give it to the head official Steve Carman.

He continued: "So anyway, as the story goes and we go on and we go on. We win Sunday night. And Steve Carman comes in and he has to give the envelope back to the captain.

"We're in the room hooting and hollering and he says, pulls me aside, and I know what he's gonna say, 'Here's your envelope.'

More: Will Zalatoris wants Tiger Woods to use a golf cart

"I said why don't you open it up in front of everyone and read the name in there. So he tears it open and he reads it and it's Tiger Woods.

"The whole room went silent. So they thought I was such a clown that I put Tiger Woods in there as the guy who wouldn't play on Sunday in case of an injury.

"So I didn't tell the story for two full years. So we, somehow, unhooked the envelope and I took the name out of there, it was someone who was a [captain's] pick. And he [Tiger] texted me for weeks, 'Dude, you've got the biggest balls of anyone I've ever seen!'

"I went, 'You know what, why not put your name in!? I thought I'd stir things up.' So that went for years then I finally told the story. I took a lot of heck for it but for two years I had everyone believing I put Tiger Woods' name in the envelope."

Next page: Tiger Woods goes in hard on LIV players